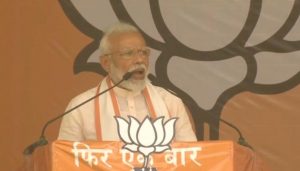 Prime Minister Narendra Modi on Thursday promised to build a “grand statue” of 19th-century reformer Ishwar Chandra Vidyasagar at the same spot where his bust was vandalised during the clashes at Amit Shah’s roadshow in Kolkata.

“We saw hooliganism by TMC workers again during Amit Shah’s roadshow in Kolkata, they vandalized Ishwar Chandra Vidyasagar’s statue. We are committed to Vidyasagar’s vision and will install his grand statue at the same spot,” said PM Modi at a rally in Uttar Pradesh’s Mau.

Amit Shah had accused the Trinamool of orchestrating violence during his Kolkata roadshow. He alleged that TMC party workers were part of a conspiracy to vandalise the statue of Ishwar Chandra Vidyasagar. He presented some photographs to the media to prove his point.

The Trinamool hit back and said they have video evidence that establishes the BJP’s complicity in the violence and vandalism.

Former Jammu and Kashmir chief minister Omar Abdullah said in his tweet, “The BJP can team up with the EC in West Bengal, they can have a tailor made campaign designed to fragment & polarise the electorate, they can have all their model code violations overlooked. None of it will matter because on the 23rd @MamataOfficial didi will sweep West Bengal.”

The Election Commission (EC) on Wednesday curtailed campaigning in Bengal over the violence, and said it was “deeply anguished at the vandalism done to the statue” of an icon.