Congress President Rahul Gandhi on Monday called Prime Minister Narendra Modi a ‘habitual liar’ and said the ordnance factory inaugurated on Sunday by Modi in Amethi had been producing small arms for a while.

Rahul posted a tweet accusing Modi of “lying by force of habit”.

“I laid the foundation of Amethi’s ordnance factory in 2010. For many years, it has been producing small arms. Yesterday, you went to Amethi and being forced from the habit, you lied again. Have you no shame,” the Congress President tweeted.

Rahul’s remarks came a day after Modi visited Amethi in Uttar Pradesh to launch a manufacturing unit for AK-203 rifles.

Speaking at the event, Modi said that this development had been long delayed. He said that this delay in the production of modern rifles for our soldiers actually amounts to an injustice to the jawans. 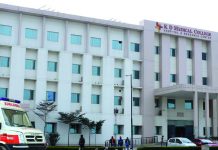