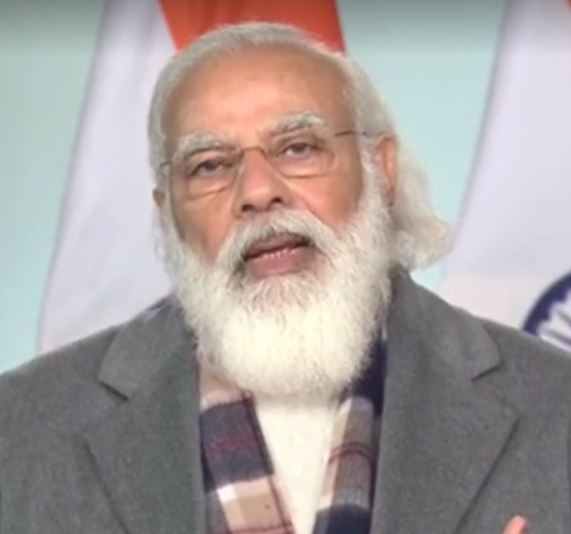 Speaking on the occasion, the Prime Minister said today is the day to move forward with new energy, to prove new resolutions and today the country is getting new technology to build houses for the poor, middle class. He said the houses are called light house projects in technical language but these 6 projects are really like lighthouses showing a new direction to the housing sector in the country.

The Prime Minister cited these light house projects as an example of the approach of the present Government. He said at one time housing schemes were not as much as the priority of the central government and did not go into the nuances and quality of home construction. Today, the country has chosen a different approach, adopting a different route and a better technology, to complete the projects faster. He stressed on the importance for the Government ministries not to have large and sluggish structures, but to be fit like startups. He expressed happiness on the active participation of more than 50 Innovative Construction Companies from around the world. He said this global challenge has given us a scope to innovate and incubate with new technology.

The Prime Minister said in the next phase of the same process, the work of 6 light house projects at different sites is starting from today. These light house projects will be made up of modern technology and innovative processes and reduce the construction time and make a more resilient, affordable and comfortable house for the poor.

The Prime Minister remarked that the ASHA-India program is being run to promote research and startups related to modern housing technology within the country. Through this, new and affordable technology for building 21st century houses will be developed in India itself. He said Five best techniques have also been selected under this campaign. He said that the biggest dream of poor or middle class people living in the city is owning their house. But over the years, people were losing their trust in their house. He said even after earning the trust, the demand has gone down due to high prices. People have lost trust whether they would have legal standing in case of any issue. High interest rates of the bank and the difficulties in getting loans, have further dampened the interest on owning a house. He expressed satisfaction on the efforts taken in the last 6 years to restore the confidence of a common man that he too can have his own house. Under the Pradhan Mantri Awas Yojana, lakhs of houses have been built in a very short time in cities.

The Prime Minister said that in PM Awas Yojna construction’s focus is both on innovation and implementation as per the local needs and expectations of the home-owners. It is a complete package as every unit is equipped with electricity-water-gas connection. Transparency is being ensured through the technologies like geo-tagging and Direct Benefit Transfer (DBT) to the beneficiaries.

Talking about the benefits for the middle classes, Modi said they are getting rebates on home loan interest. A special fund of Rs 25 thousand crore,  created for incomplete housing projects, will also help the middle class.  Measures like RERA have brought back the trust of the home owners and given them confidence that they will not be cheated out of their hard earned money. There are 60 thousand projects registered under RERA and thousands of grievances have been redressed under the law.

The Prime Minister said that getting the key of a house is not just getting possession of a dwelling unit but it opens doors of dignity, confidence, safe future, new identity and expanding possibilities. All round work that is being done for ‘Housing for All’ is bringing positive change in the lives of crores of poor and middle class families.

The Prime Minister also mention new scheme that was taken up during the Corona pandemic i.e. Affordable Renting Housing Complex Schemes. Government is working with industry and other investors to provide housing with fair rents to the workers who come to work from various states to different states. Their housing conditions are often unhygienic and undignified. Effort is to provide them fair rent dwellings in the vicinity of their workplace. This is our responsibility that our worker friends should live with dignity, Modi added.

The Prime Minister also recounted the measures taken recently to help the real estate sector. Measures like reduction of tax on cheap houses from 8 to 1 percent, GST reduction from 12 to 5 per cent,  recognizing the sector as infrastructure for making it eligible for cheap loans have taken our ranking for construction permit from 185 to 27. Procedure for construction permissions have been taken online in more than 2000 towns, the Prime Minister said.

The Prime Minister also informed that more than 2 crore housing units have been constructed in rural India. Effort will be on to accelerate the speed of rural housing this year.