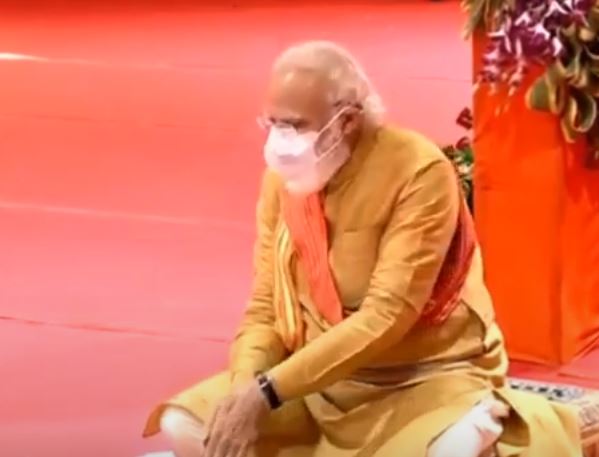 He arrived in Lucknow and took a chopper to reach Ayodhya for the bhoomi pujan.

Upon landing in Ayodhya, PM Modi first visited the Hanumangarhi temple and offered prayers following which he arrived at ‘Shree Ram Janmabhoomi’ and was seen taking part in pooja and darshan of ‘ Shree Ramlala Virajman’.

The priest at RamTemple ‘Bhoomi Pujan’ said, “Nine bricks are kept here… these were sent by devotees of Lord Ram from around the world in 1989. There are 2 lakh 75 thousand such bricks out of which 100 bricks with ‘Jai Shri Ram’ engraving have been taken.”

Rajya Sabha MP  Subramanian Swamy  earlier tweeted, “Today PM Modi must declare on the Ayodhya stage that Ram Setu is a National Heritage Monument since it satisfies all the conditions of the AMASR Act and inform the SC as per the Notice on my WP issued to Govt in 2015. The file from Culture Ministry is lying on PM’s table.”

As many as 175 guests are present for the grand groundbreaking ceremony for the construction of Ram temple in Ayodhya.

BJP members and workers performed special prayers at the party office in Kamalalayam.