Prime Minister Narendra Modi on Sunday visited Andaman and Nicobar Islands and inaugurated the ITI at Arong, a modern sports complex and laid the foundation stone for Shore protection work near Mus Jetty and Extension of Campbell Bay Jetty.

PM Modi also laid a wreath at the Tsunami Memorial, and lit a candle at the Wall of Lost Souls.

PM Modi visited Port Blair and laid a wreath at the Martyrs Column, and visited the Cellular Jail. At Cellular Jail, he visited the cells of Veer Savarkar, and other freedom fighters. He hoisted a high mast flag and offered floral tributes at the Statue of Subhas Chandra Bose. At a public event to mark the 75th anniversary of the hoisting of Tricolour on Indian soil by Subhas Chandra Bose, Narendra Modi released a commemorative postal stamp, coin, and First Day Cover.

Speaking on the occasion, PM Modi talked of the great natural beauty, culture, tradition and art of the Islands. Speaking of the family and collective traditions of the Islands, he said this has been a strength of Indian society, over the years.

PM Modi appreciated the people of the Andaman and Nicobar Islands for their spirit and hard work in rebuilding the islands after the tsunami.

He said the projects unveiled today would go a long way in developing sectors such as education, health, employment, skill development, transportation, power, sports and tourism.

The Prime Minister reaffirmed his Government’s determination to not leave anyone, or any part of the country behind, in the march towards development. He said the aim is to reduce distances, and develop a sense of closeness in hearts.

Modi said that the Union Government is working towards improving ease of living for the people of Andaman and Nicobar Islands. He spoke of the expansion of healthcare facilities on the Islands.

PM Modi said that the effort is to undertake development work while preserving the environment and local culture. 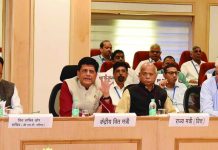