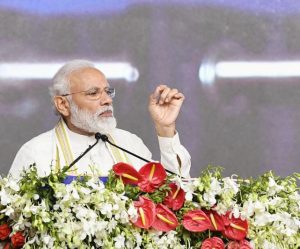 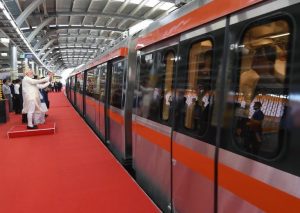 At Vastral Gam Metro Station in Ahmedabad, Modi inaugurated the first phase of Ahmedabad Metro Service and laid the foundation stone for the second phase of the Ahmedabad Metro. India’s first indigenously developed payment eco-system and automatic fare collection system based on One Nation, One Card Model was also unveiled. 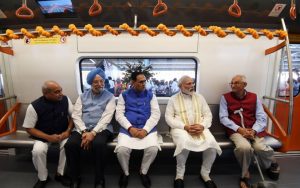 He then flagged off the Metro train and took a ride in the metro.

Addressing the gathering at the BJ Medical College Ground, Modi said that it is an historic day, as the dream of Ahmedabad Metro has come into fruition. He said that the metro will provide a convenient and environment friendly mode of transportation for the people in Ahmedabad. Before 2014, there was only 250 km operational network of metro in the country, while now there is 655 km.

Prime Minister also spoke about the various initiatives taken by the State Government and Union government for the development of Gujarat, like water supply schemes, electricity for all, infrastructure development, housing for all and schemes for poor. He also explained in detail the various schemes undertaken for the welfare of Adivasi community in the State.

The transformation of the Gujarat in the past couple of decades is due to meticulous planning and hard work of the people in the State, Modi said.

He added that Gujarat should be taken as a case study on how development should be undertaken. He mentioned that the multitude the infrastructural development projects being implemented in Gujarat will transform the State massively.

Modi said that Lothal Maritime Heritage Complex once completed will showcase the maritime strength of ancient India. He said that the museum will have world class facilities and will increase the tourism potential of the State.

Stating health as a priority of the Union Government, Modi said that the government is building quality health care infrastructure throughout the country from Wellness Centres to Medical Colleges.

Modi said that the Government is committed towards fighting all the menaces in the country, ranging from corruption to terrorism. He assured the people that strict action will be taken against elements working against the nation. He asked the opposition not to play vote bank politics over the security of the nation. He said that such actions will only demoralize the armed forces and strengthen the enemy.