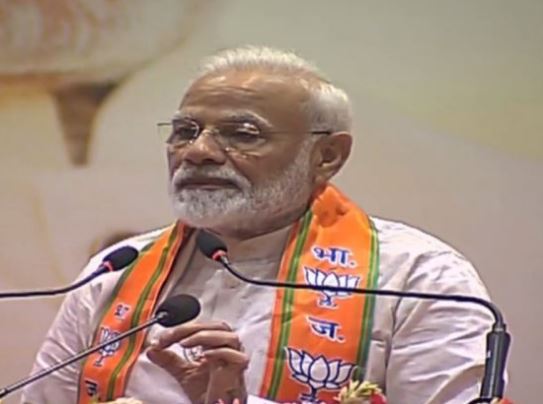 Addressing the party workers, PM Modi said that the membership drive will further connect people from all walks of life with BJP family.

Referring to Union Budget, PM Modi said that his aim of turning India into a $5-trillion economy will transform the lives of each and every family in the country.

Modi expressed his confidence that India will become a $5 trillion economy in the next 5 years.

He also slammed the critics for questioning ‘$5 trillion economy’ mission of the government.

Modi said, “size of the cake matters’, meaning, the bigger the cake, bigger the slice people will get. That is why we have goal of a USD 5 trillion-dollar economy.”

On his arrival in Varanasi, PM Modi unveiled a statue of former PM Lal Bahadur Shastri.

“Tribute to an exemplary leader admired by all sections of society. On landing in Varanasi, PM @narendramodi unveiled a statue of former PM Shri Lal Bahadur Shastri Ji. This statue is located at the Varanasi airport,” Prime Minister’s Office said in a tweet.

PM Modi then proceeded to launch a tree-plantation campaign — “Anand Kanan” — in the temple city, before kickstarting the membership drive of the BJP party,

This is Modi’s second visit to the constituency after winning the Lok Sabha elections.

Modi had visited Varanasi on May 27 to thank people for keeping faith in his government.