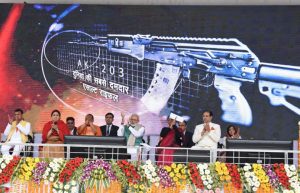 He also laid the Foundation Stone and dedicated various development projects in Amethi.

In his special message on the occasion, which was read out by Defence Minister Nirmala Sitharaman, Russian President Vladimir Putin said that “the new joint venture will manufacture world-famous Kalashnikov assault rifles of the newest 200 series and eventually will reach full localization of production. Thus, the Indian defence-industrial sector will have the opportunity to fulfil the needs of national security agencies in this category of small arms, resting upon advanced Russian technologies.”

Addressing the gathering, Prime Minister Modi thanked President Putin for this partnership and said lakhs of rifles will be made from this facility in Amethi and will strengthen our security forces.

Modi also said that this development has been long delayed. He said that this delay in the production of modern rifles for our soldiers actually amounts to an injustice to the jawans. He recalled that despite projecting a requirement for bullet-proof jackets in 2009, no such jackets were procured till 2014. This requirement has now been fulfilled by the Union Government, he added.

Modi said that earlier, such delays had also been happening in the procurement of other important armaments. In this context, he also mentioned the Rafale fighter planes and said these will start joining the Air Force within a few months, as a result of the efforts of the Union Government.

He also mentioned other development projects in Amethi, which were facing various bottlenecks in operationalization. He said those bottlenecks were being removed so that the projects could be operationalized, and provide employment to people. He said the implementation of schemes such as PM Awas Yojana, Ujjwala Yojana, Saubhagya Yojana and construction of toilets, in Amethi, is now bringing ease of living to the people.

PM Modi said that the Union Government is empowering the poor, and helping them come out of poverty. He said similarly, the farmers are being empowered. In this context, he mentioned the PM Kisan Samman Nidhi. He said this scheme will ensure that 7.5 lakh crore rupees reach farmers over the next ten years. 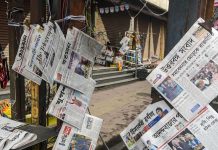