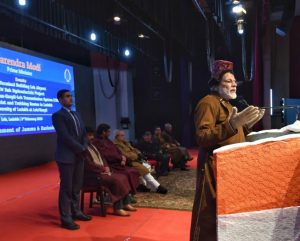 Prime Minister Narendra Modi on Sunday arrived in Ladakh in the first leg of his one-day visit to Leh. He inaugurated and laid foundation stones for various development projects.

This University will be a cluster University comprising of degree colleges of Leh, Kargil, Nubra, Zanskar, Drass and Khaltsi and will administrative offices at Leh and Kargil for the ease of students.

While inaugurating these projects Modi said, “We have left behind culture of delays”. He added that his government will ensure that for all the projects for which foundation stone is laid by him will be inaugurated by him.

Five New tourist and trekking routes in Ladakh were opened today as well.  Modi said that life gets easier, economically as well once a city is well connected.

He also said, once Bilaspur-Manali-Leh rail line is completed, the distance from Delhi to Leh will be reduced.

He also said that these projects will result in better availability of electricity, improved connectivity in the region. It will also open better livelihood opportunities to many villages.

In addition, Protected Area Permit’s validity has been increased to 15 days. Now tourists will be able to enjoy their journey to Leh for a longer time.

PM Modi said that a few changes have been made in the LAHDC Act and the Council have been given more rights concerning the expenditures. Now the Autonomous Council releases the money sent for the region’s development, he added.