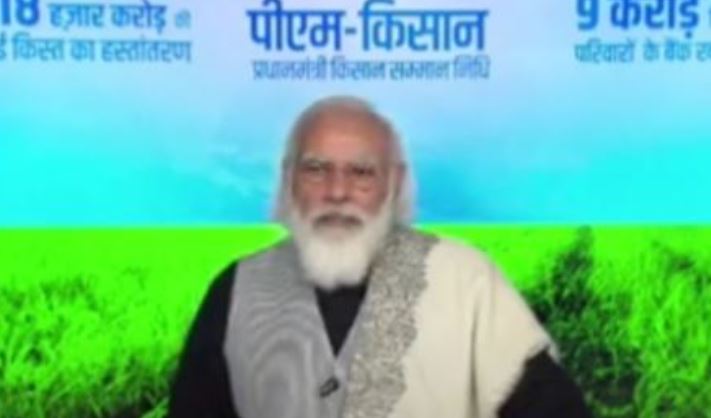 With the press of a button, he enabled the transfer of money directly to the bank accounts of the farmers.

PM Modi addressed over nine crore farmers from six states in a virtual event amid ongoing protests against three farm laws enacted by the Centre.

“Today, Rs.18,000 crore have been deposited directly in the bank account of more than 9 crore farmer families of the country at one click.

Ever since this scheme started, more than Rs.1,10,000 crore have reached the account of farmers,” Modi said.

The Prime Minister expressed regret that more than 70 lakh farmers of West Bengal have not been able to get this benefit. He said over 23 lakh farmers of Bengal have applied online to take advantage of this scheme. But the state government has stopped the verification process for so long. He said the parties which do not speak in the interest of farmers in West Bengal, come here to Delhi and talk about the farmer. He said these parties are missing APMC-mandis nowadays, but these parties repeatedly forget that there are no APMC-mandis in Kerala and these people never agitate in Kerala.

The Prime Minister said the Government worked at aiming to reduce the input cost of the farmers. He listed some farmer-centric initiatives of the Government like Soil Health Card, Neem Coating of Urea, scheme for distribution of Solar Pumps which helped in reducing the input cost for the farmers. He added the government tried to ensure that the farmers have a better crop insurance cover. Today, crores of farmers are getting the benefit of the PM crop insurance scheme.

PM Modi said the government tried to ensure that the country’s farmers get a fair price for the crop. He said the Government fixed one and a half times the production cost as MSP for the farmers as per the recommendations of the long-standing Swaminathan Committee report. He added the number of crops for which MSP is available were also increased.

The Prime Minister said today, the farmers are getting a pucca house, toilet and clean piped drinking water. They have benefited greatly from the free electricity connection, free gas connection. Free treatment up to Rs. 5 lakh under Ayushman Bharat scheme has reduced the major concern of the lives of farmers.

The Prime Minister said investment and innovation has improved in other sectors, the income was enhanced and Brand India was established in that sector. He said now the time has come for Brand India to establish itself in the agricultural markets of the world with equal prestige.

The Prime Minister thanked all the farmers across the country who have fully supported and welcomed the agricultural reforms and assured that he will not let them down. He said people mainly from the rural areas, participated in the recently held local body elections in Assam, Rajasthan, Jammu and Kashmir and in a way, rejected all the parties that misled farmers.

IS flag hoisting at mosque attempt to give bad name...