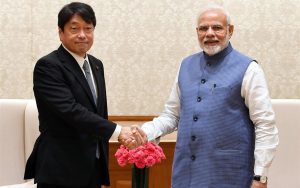 Prime Minister Narendra Modi on August 20 meets Japanese Defence Minister Itsunori Onodera and said that defence cooperation is a key pillar of the relationship between India and Japan. The Japanese minister is on a two-day visit to India.

PM Modi also called for boosting various defence dialogue mechanisms between India and Japan and also appreciated the progress the two countries have made in defence technology cooperation. He also called for enhancing linkages between the armed forces of the two nations.

PM Modi said that he was looking ahead to visiting the country later this year. He made the comments in a statement released by the Prime Minister’s Office after a visit from Japan’s Defence Minister Onodera.

The visit is totally aimed at strengthening military cooperation between the two nations, particularly in the sphere of maritime space, especially with China’s growing influence in the Indian Ocean.

The PM recalled his association with Japan since the time he was the chief minister of Indian state of Gujarat.