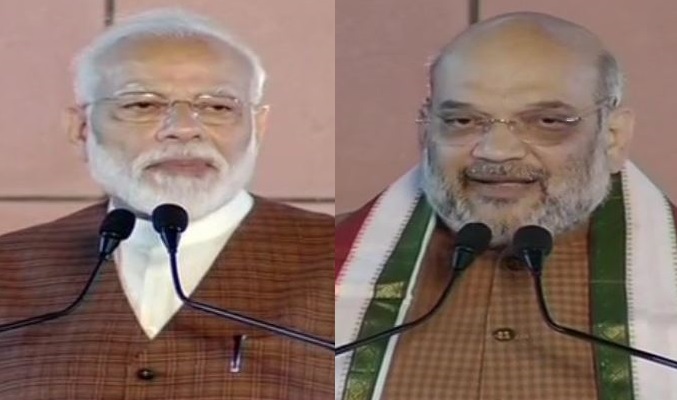 Prime Minister Narendra Modi and Union Home Minister Amit Shah thanked the people of Maharashtra and Haryana for giving the party another opportunity to serve people.

Modi said, people of Maharashtra have blessed the NDA with immense affection.

“People of Maharashtra have blessed the NDA with immense affection. We are humbled to have got the people’s support yet again. Our work towards Maharashtra’s progress continues! I salute each and every Karyakarta of the BJP, Shiv Sena and our entire NDA family for their hardwork,” Modi said in a tweet.

In another tweet where Modi thanked the people of Haryana, he said his government will continue to work with the same zeal and dedication for the state’s progress. He also hailed the efforts of hardworking karyakartas of the state unit who toiled extensively and went among the people to elaborate on our development agenda.

“I thank the people of Haryana for blessing us. We will continue to work with the same zeal and dedication for the state’s progress. I laud the efforts of hardworking @BJP4Haryana Karyakartas who toiled extensively and went among the people to elaborate on our development agenda,” Modi tweeted.

Shah said, “under the leadership of PM Modi, the Government of Maharashtra will continue to be dedicated to the progress of the state and service to the people.

“I thank people for making the BJP the single-largest party and giving it another opportunity to serve them,” Shah added.

The voting in both states held on October 21. The counting of votes began at 8 am today morning.