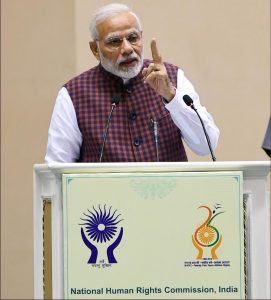 The commission was established on October 12, 1993 under the Protection of the Human Rights (PHR) Act, 1993.

Modi said that in the last two and a half decades, NHRC has contributed to nation building, by becoming the voice of the deprived and the oppressed.

“The role of NHRC is crucial for achieving the Sustainable Development Goals,” he added.

The Prime Minister said that human rights should not be merely a slogan, but also a part of our ethos. He further said, “serious efforts have been made in the last four years to improve the quality of life of the poor. The Government’s focus has been to ensure that all Indians have access to the basic needs of human beings.”

He also mentioned steps have been taken to improve ease of access to justice, such as increasing the number of e-courts, and strengthening of the National Judicial Data Grid.

“Divayago (Disabled) the Rights of Persons with Disabilities Act to increase the reservation of jobs or Transgender persons (Protection of Rights) Bill, it is the only example of our Government’s commitment to human rights,” PM said.