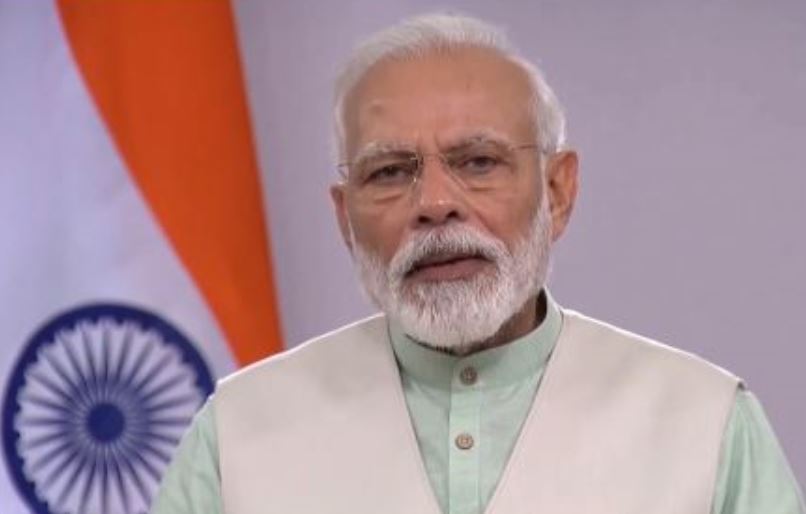 Prime Minister Narendra Modi on Sunday addressed the nation through the radio program ‘Mann ki Baat’ and talked about the opening of the economy gradually.

PM said “The last time I spoke to you through ‘Mann Ki Baat’, passenger train services, busses and flights had come to a standstill. This time around much has resumed-Shramik special trains are operational; other special trains too have begun. With utmost precautions, flights have resumed; industry too is returning to normalcy; thus, opening up a major segment of the economy. In such a scenario, we need to be even more alert and careful. Whether it’s the mandatory two yards distancing, wearing face masks or staying at home to the best extent possible, there should be no laxity on our part in complete adherence.”

PM further said, “The battle against Corona is being fiercely waged in the country through collective efforts. When we glance at the world, we can actually experience the magnitude of the achievements of the people of India. Our population itself is many times that of most countries. The challenges facing the country too are of a different kind, yet Corona did not spread as fast as it did in other countries of the world. The mortality rate of corona too is a lot less in our country. All of us deeply regret the loss that we had to undergo. But whatever we have been able to save is a result of the collective resolve of the country. In a country as big as ours, everyone is determined to put up a fight; the entire campaign is people driven.”

“In this fight, besides the resolve of our countrymen, the other biggest strength is their spirit of service. In fact, during this pandemic, we, the people of India have visibly proved that the notion of service and sacrifice is not just our ideal; it is a way of life in India. We are familiar with the dictum- Sewa Paramo Dharmah; service is a joy in itself….service is a satisfaction in itself. You must have observed that a person devoted to the service of others never suffers from any kind of depression or tension. Every moment of his life and attitude towards life exudes immense self-confidence, positivity and vivacity,” PM added.

Talking about the spirit of corona warriors, PM said, “I have often refered to the spirit of service on part of our doctors, nursing staff, sanitation workers, police personnel and media persons. I have touched upon this in ‘Mann Ki Baat’ too. There are innumerable people who are willing to give their all in the service of others. One such gentleman is K.C. Mohan of Tamilnadu. Shri Mohan ji runs a salon in Madurai. Through sheer hard work, he had saved five lakh rupees for his daughter’s education. But he spent the entire amount in the service of the needy and the underprivileged in these difficult times. Similarly, Gautam Das ji of Agartala whose only means of sustenance is plying a handcart is feeding the needy by buying rice and pulses out of savings from his daily earnings. I have come to know of a similar example from Pathankot, Punjab. Divyang Raju through a small investment raised with help from others got over three thousand masks made and distributed them. In these difficult times, Brother Raju has arranged for feeding of around a hundred families. Numerous stories of perseverance of women’s self help groups are coming to the fore from all corners of the country. In villages and small towns, our sisters and daughters are making thousands of masks on a daily basis. Many social organizations too are helping them in this endeavor.”

Talking about various new innovations to fight corona, PM said, “one more thing that has touched my heart is innovation at this moment of crisis. A multitude of countrymen from villages and cities, from small scale traders to start ups, our labs are devising even new ways of fighting against Corona; with novel innovations. The example of Rajendra Yadav of Nasik is very interesting. Rajendra ji is a farmer from Satna village in Nasik. To protect his village from the spread of Corona, he has devised a sanitization machine attached to his tractor and this innovation is performing very effectively. Similarly I was observing numerous photographs on social media. Many shopkeepers in order to adhere to the two yard distancing have installed big pipe lines in their shops. Merchandise is released from one end and collected at the other end by the customer. Meanwhile teachers and students have come together with myriad innovations in the field of education. Online classes, video classes are being innovated in different ways.”

On the matter of vaccine, PM said, “Work being done in our labs on Corona vaccine is being keenly observed by the world and we are hopeful too. In order to change circumstances, besides resolve, a lot depends on innovation too. The journey of the human race, spanning thousands of years has reached this modern phase on account of continuous innovation. Thus, these special innovations form the firm basis of our victory over the pandemic.”

On the ongoing situation of labourers and workers in the country, PM said, “the path of our fight against Corona goes a long way. It is a calamity, a scourge that does not have an antidote in the entire world; there is no prior experience on that. Amid this scenario, we are facing newer challenges and consequent hardships. This is the situation of every Corona affected country in the world- India is no exception. There is no stratum in our country unaffected by the difficulties caused by the affliction-the most gravely affected by the crisis are the underprivileged labourers and workers. Their agony, their pain, their ordeal cannot be expressed in words. Who amongst us cannot understand and feel what they and their families are going through! All of us are trying to share their distress; the torment…..the entire country is doing that. Our railway personnel are at it day and night. From the centre, states, to local governance bodies, everybody is toiling around the clock. The way our railway men are relentlessly engaged, they too are front line Corona Warriors. Safely transporting lakhs of labourers in trains and busses, caring for their food, arranging for their quarantine in every district, testing, check up and treatment is an ongoing process on a very large scale. But friends, the current scenario that we are witnessing is an eye opener to happenings in the past to the country; it is also an opportunity for scrutiny and lessons for the future. Today, the distress our workforce is undergoing is representative of that of the country’s eastern region. The very region which possesses the capacity to be the country’s growth engine, whose workforce possesses the capability and the might to take the country to greater heights…the eastern region needs development. It is only the development of the eastern region that can lead to a balanced economic development of the country. Ever since the country offered me the opportunity to serve, we have accorded priority to the development of eastern India. In the last few years, much has been done in this direction which gives me inner satisfaction. And now, considering the migrant labourers, the need of the hour is devising a new solution – paradigm….we are ceaselessly taking steps in that direction. For example, at places skill mapping of labourers is being carried out; at other places start ups are engaged in doing the same…the establishment of a migration commission is being deliberated upon. Besides that, recent decisions taken by the Central government have opened up vast possibilities of village employment, self employment and small scale industry. The objective of these decisions is finding solutions to the situation, for the sake of a self-reliant India. Had our villages, towns, districts and states been self-reliant, problems facing us would not have been of such a magnitude as is evident today. But moving from darkness toward light is a human trait. Amidst multiple challenges, it gives me joy to see extensive deliberation in the country on Aatmnirbhar Bharat, a self-reliant India. People now have begun to take it as a movement of their own. Our countrymen are picking up the reins of leadership of this mission in their own hands. Many people have mentioned the fact that they have made complete lists of the products being manufactured in their vicinity. These people are now buying only these local products, promoting “Vocal for Local”. In order to encourage “Make in India” everyone is expressing one’s own resolve.”

Uttar Pradesh: 13 killed as bus collides with truck on Agra-Lucknow...