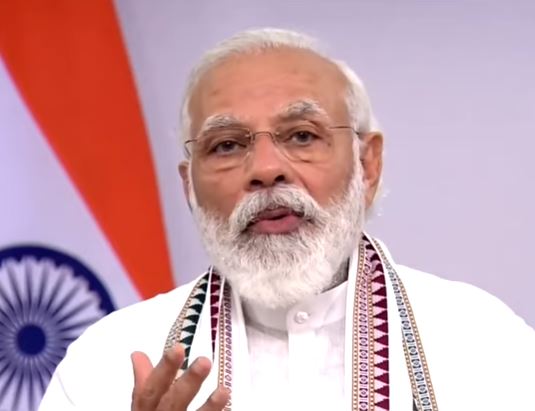 Prime Minister Narendra Modi on Saturday delivered a video address on the occasion of inauguration of Dharma Chakra Day. The International Buddhist Confederation, under the aegis of the Ministry of Culture, Government of India, is celebrating Asadha Poornima on July 4, 2020, as Dharma Chakra Day.

This day commemorates Gautam Buddha’s First Sermon to his first five ascetic disciples at the Deer Park, Rsipatana in the present day Sarnath near Varanasi, UP. The day is also celebrated by Buddhists all over the world as the day of Dharma Chakra Parvattana or “Turning of the Wheel of Dharma”.

Prime Minister conveyed his greetings on Ashadha Poornima, also known as Guru Purnima, and also paid homage to Lord Buddha. He expressed happiness that copies of Mongolian Kanjur are being presented to the Government of Mongolia.

Prime Minister talked about the teaching of Lord Buddha and about the eight-fold path which shows the way towards the well-being of many societies and nations. He noted that Buddhism teaches respect for people, women, poor, for peace and non-violence and these teachings are the means to a sustainable planet.

Prime Minister said that Lord Buddha spoke about hope and purpose and saw a strong link between the two. He spoke about how he is hopeful about the 21st century, and this hope springs from the youth. He underlined that India has one of the largest start-up ecosystems where bright young minds are finding solutions to global problems.

Prime Minister said that the world today is fighting extraordinary challenges, lasting solutions to which can come from the ideals of Lord Buddha. He spoke about the need to connect more people with Buddhist heritage sites and enhance connectivity to these sites. He also mentioned about the recent Cabinet decision to declare Kushinagar Airport in UP as an International Airport, which would facilitate the travel of pilgrims and tourists, while also giving a boost to the economy in the region.