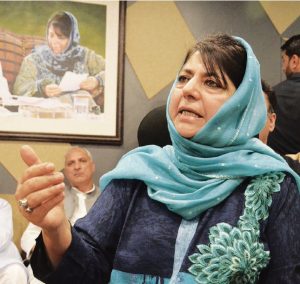 Former J&K Chief Minister Mehbooba Mufti has said that the Prime Minister Narendra Modi  had assured her that the centre would not take any step to undermine Article 35A which grants special citizenship rights to people of J&K and forbids outsiders from settling in the state.
“I met Prime Minister and told him that if there is any such move (to repeal Article 35A) we will walk out,”  Mufti said in an interview to a local daily. “Then there was an agreement that the case would be taken to a larger constitutional bench and ultimately put into cold storage”.
Mufti said she met the PM and the home minister Rajnath Singh soon after she learnt that the centre wanted to do away with the law by opposing it in the court for being discriminatory to the women. According to the law, if a woman from the state marries a person who is not a state subject, she loses the right to inherit any property from her parents.
But the PM assured her that the centre had no such plans, which persuaded her to continue in the alliance with the BJP.
“I had got information that they (New Delhi) are going to introduce something in the court in the name of women’s rights to dilute the Article,” Mufti said adding that her meeting with the PM abated these fears.
Mufti cautioned against the  attempts to fiddle with the law, warning of long term repercussions in the state which centre won’t be able to handle.
“If they care for people of the state they shouldn’t do it. This Article has got every person even BJP MLAs on same page across J&K. I don’t think they should go against the will of people in united J&K,” Mufti said. “They (people in J&K) have already too much on their plate to take care of. They should not do it. It will have serious repercussion which they (centre) will not be able to handle”.
She also highlighted the detrimental fallout of any tinkering with the law on the mainstream politics in the state.
“It is mainstream parties which are fighting on so many fronts here (J&K),” Mufti said. “If you just ignore their anxieties it is bad for the country”.