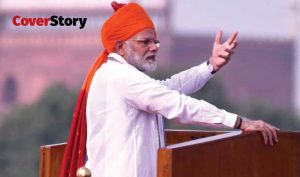 Prime Minister Narendra Modi seems to be replaying ‘Shining India’ of Atal Bihari Vajpayee’s era. Only difference is the tone in Vajpayee’s assertions. Vajpayee has always maintained modesty in his assertion and avoided loudness. Whereas, Modi has been aggressive when it comes to taking on his opponents. And, this is what he did on the 72nd Independence Day while addressing the nation from ramparts of the Red Fort.

On behalf of the nation, he disowned every single contribution made by the grand old part of the country, the Congress and grabbed the opportunity to say that the people did not stop at electing him, but they joined in building the nation. The message was clear that the process of nation building started with the wining of the chair of prime ministership. For him, the Congress, if contributed to the nation building, had been so slow that the country would have waited for decades and centuries to reach the target in many important fields vital for the life of vast majority. He cited pace of rural electrification, LPG connections and construction of toilets. Ahead of 2019 polls, Modi also tried to sell new dreams and declared five-point program: connectivity for all, sanitation for all, health for all, skill for all and insurance for all. He announced the giant health insurance program ‘Ayushman Bharat’ that was announced in the last budget. The program was kept pending for a suitable time that should coincide with the polls in the states and of the Lok Sabha.

Modi’s speech from the ramparts of Red Fort gives a clear indication of the political line he is to adopt in the coming Lok Sabha polls. The corruption is again going to be an election issue. He will reiterate his allegations that Congress rule was corrupt and inefficient. Instead of counting scandals during the Congress rule, he is now claiming that he gave a corruption-free rule. This could not be done in 2014 polls.

“The corrupt and those who have black money would not be forgiven. He said that Delhi’s streets are now free from power brokers, and the voice of the poor is heard,” he said.

Extending the theme of transparent and honest regime, he referred to the increase in the number of tax payers and reduction in the number of beneficiaries of the government schemes. He asserted that better targeting of government benefits has been achieved by weeding out about 6 crore fake beneficiaries. The honest taxpayer of India has a major role in the progress of the nation, he said, adding that it is due to them that so many people are fed, and the lives of the poor are transformed. He also mentioned how registration of fake companies has been canceled.

All these things are parts of his same old and tested theme of Sabka saath, Sabka Vikas which is likely to continue with in the coming Lok Sabha polls. His speech from the Red Fort testified it. He attacked the Congress on corruption and so called ‘policy paralyses’.

“International organizations and agencies were looking at India very differently today, as compared to 2013. He said that from a time of “policy paralysis”, India had moved to “Reform, Perform, and Transform.” He said India is now a member of several important multilateral organizations, and is leading the International Solar Alliance. He also asserted that India has become sixth largest economy of the world.

But in his attempt to popularize a corporate India , Modi has not forgotten to balance the social realities of the country. He not only cited the benefits he has given to farmers, but also asserted how he made OBC Commission a reality.

Will his assertions on corruption remain unchallenged?

“We ask you Prime Minister Narendra Modi today, five years after you have taken over as prime minister, are you ready for a debate on these very issues with Congress president Rahul Gandhi. Will you debate on the issue of corruption and Rafale and Vyapam and other corruption scams of your government for you did not utter a single word from the precincts of the Red Fort on corruption,” Randeep Surjewala reacted.

Surjewala also asked for an open debate with the Congress president on issues such as the state of India’s farmers, mob lynching and insecurity of women. “You did not utter a word, whether on Bihar or Unnao or any other rape incident that happened in the country,” he said.

He also asked, “Will you today debate on the failing economy and falling rupee, for the rupee has hit a new low that is 70 and the trade deficit has gone over USD 18 billion. Will you today debate as to the manner in which China has occupied Doklam, they are intruding into Ladakh and has been engulfing India from all sides.

He also urged the prime minister to debate on Pakistan-sponsored terrorism and unemployment country. Other parties and organisations have also found loopholes in his theme.

Yogendra Yadav of Swaraj India has found fault with PM’s assertion that improved saved life of three lakh children. He said that Modi referred WHO statement wrongly. He also contradicted his assertions on farmers’ issue.

The CPIM has also pointed out how trade deficit has reached a worst phase. “The worst trade deficit in 5 years; he worst performing currency in Asia this year. Modi can’t hide behind the jumla of global factors for the disaster he has unleashed on India”, says CPIM general secretary Sitaram Yechury.

Though it needs no emphasis that Modi has been aggressively pursuing liberal economic policies that are friendly to Indian and global corporate. His new programs also heavily rely on private sector. His programs for internet connectivity, skill development, health, insurance and even sanitation largely depend on the involvement of private sector. The Ayushman Bharat scheme is in fact a revival package for insurance companies. People are bound the quote figures of Crop Insurance Scheme which clearly reveals that it only benefitted insurance companies.

Will he be able to rally people behind him on these programs? The question cannot be answered easily as it depends on several factors. However, the BJP and the RSS is not relying solely on the slogan of development. A careful analysis of his last speech reveals that he will also use communal card. Modi, however, only vaguely hinted at it. He was wearing a saffron turban and he alleged that political parties are obstructing the passage of the Triple Talaq Bill. This is no secret that the BJP is using the issue for stressing that the Congress is adopting a policy of Muslim appeasement. The issue could be used further to target Muslim minority. The opposition has pointed out how he chose not to speak on cases of mob lynching. In his statement on lynching few days ago, he refrained from assuring a strong action by the centre. He also issued no warning to cow-vigilantes. 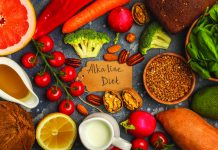