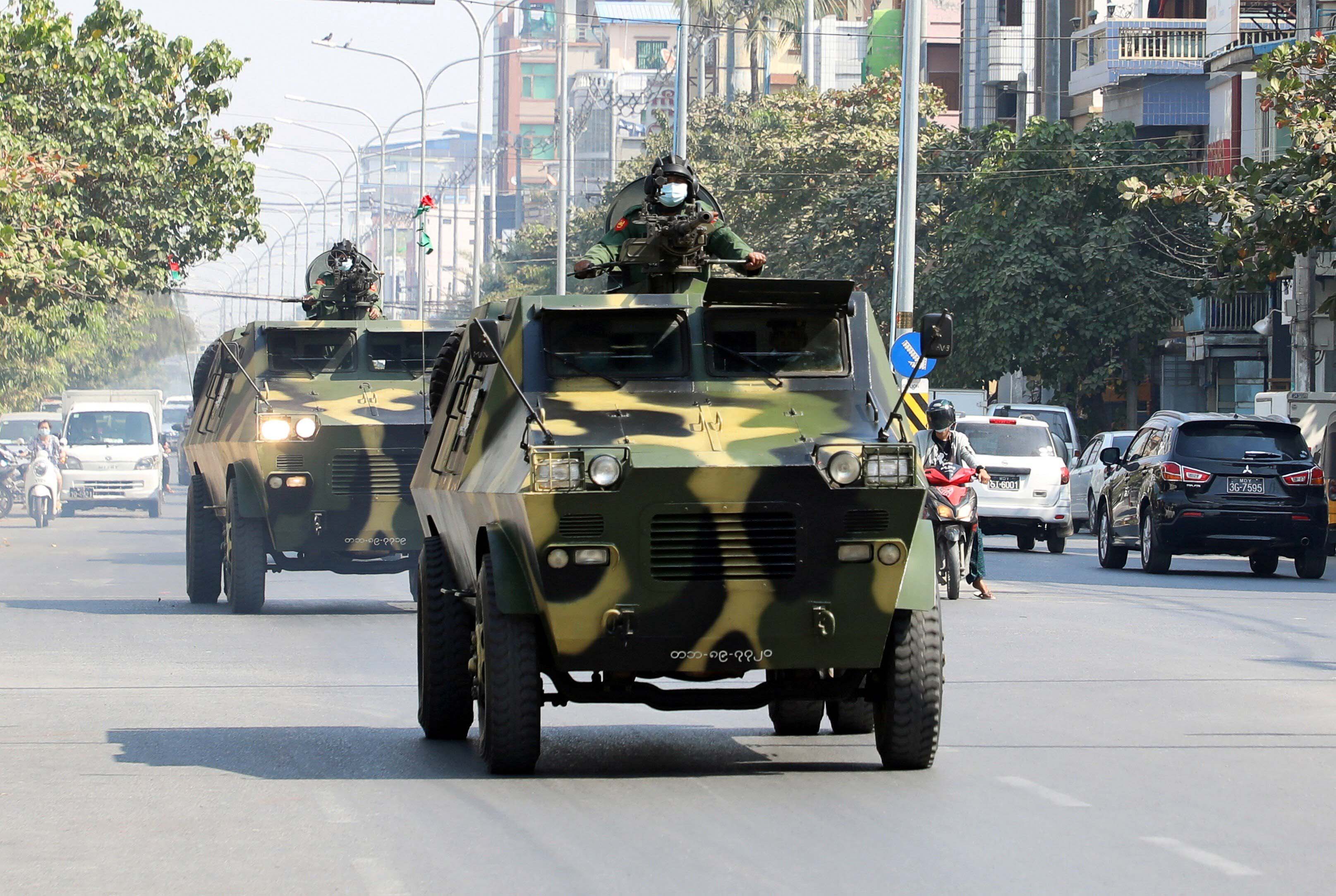 Within a year since Feb 1, 2021 military coup, Myanmar has witnessed the killing of over 1,500 civilians including children and women across the country,. The military crackdown has also resulted in the arbitrary detention and  arrest of over 12,000 people, writes Nava Thakuria

Myanmar (also known as Burma and Brahmadesh) continues to be under military rule for one year now. The south-east Asian nation has attracted international media attention since the  February 1, 2021 military coup, but as usual for the wrong reasons. The poverty stricken country with nearly 60 million population of varied ethnicities started witnessing relentless public protests against the military junta. The government forces have responded to the public uprising with crackdowns compelling hundreds of thousands of villagers to leave their places and live in makeshift shelters with minor children who are still facing difficulties ranging from hunger to illness to safety and security.
Regular incidents of killing of protesters comprising the party workers of Aung San Suu Kyi-led National League for Democracy (NLD) along with other outfits, detention and arrests of anti-junta agitators including media persons, threat of lawsuits by the military personnel against the anti-Tatmadaw front-runners and other ways of harassing the common citizens (including the burning of villages) has become the order of the day in the Buddhist majority country.

Many prominent political leaders including the President U Win Myint (around 70 years old) and State Counsellor Suu Kyi (76) have been put behind bars. The pro-democracy icon has been punished by the military courts (where civilian courts have little relevance) with many years of imprisonment against unfounded corruption charges. More trials are probably waiting for Nobel peace laureate Suu Kyi, as the Min Aung Hlaing-led junta believes that she possesses the potential to emerge as their political enemy number one.
Suu Kyi, who still enjoys wide support bases among the common Burmese irrespective of their ethnicities, was earlier put under house arrest for almost 15 years by the Than Shwe-led military regime. She was released in 2010 and later the determined lady established her prominence with electoral politics and a semi-democratic regime was installed in Naypietaw, the new capital of Myanmar, even though she was barred from becoming the President following restrictions in the military drafted 2008 constitution.

Within the last 12 months, as claimed by various agitating groups, Myanmar witnessed the killing of over 1,500 civilians including children and women by the government forces across the country. The military crackdown has resulted in the arbitrary detention & arrest of over 12,000 individuals (nearly 9,000 remain in junta detention centres till date, where at least 290 died in detention seemingly after tortures). 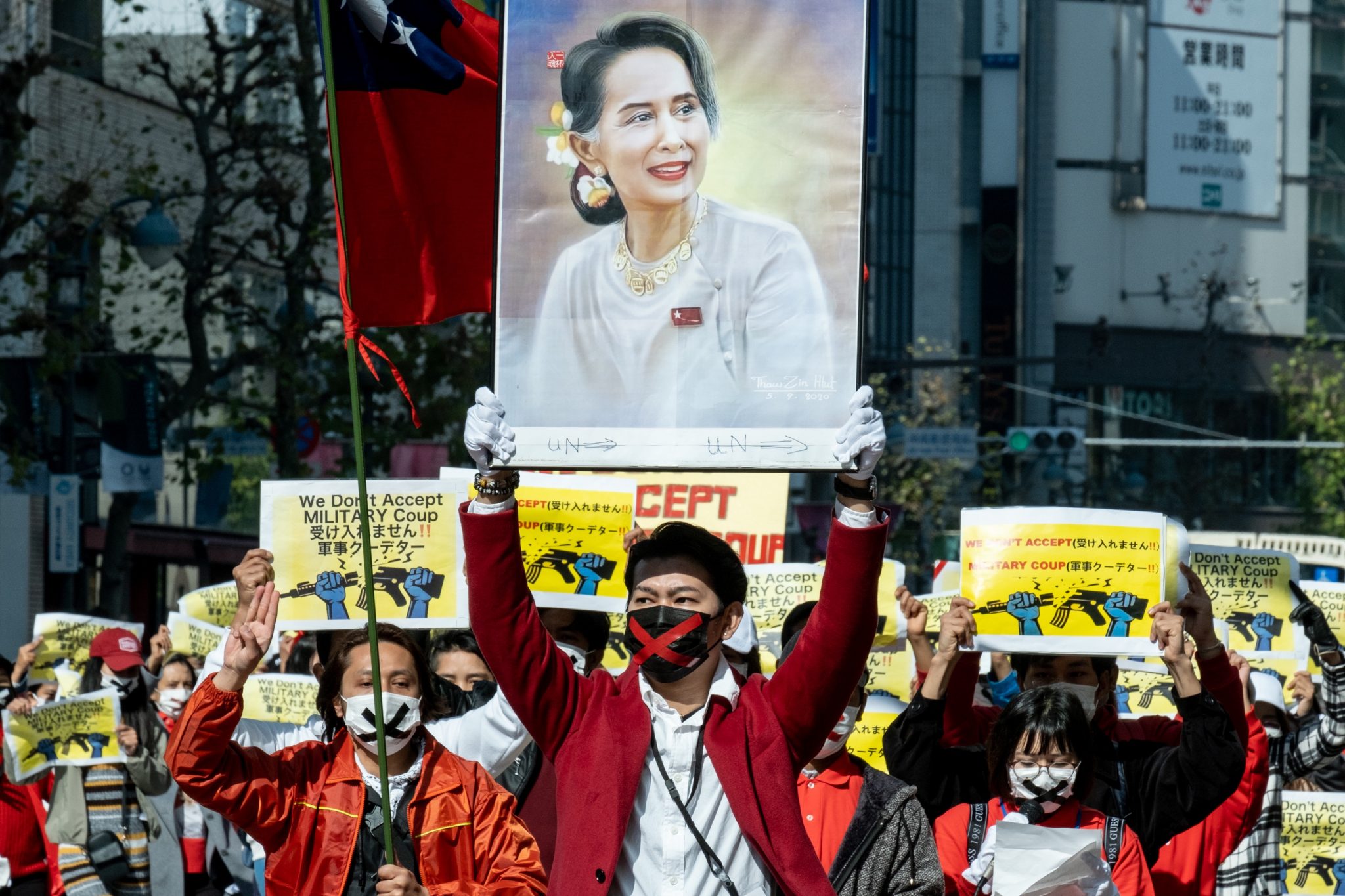 More than 150,000 toddlers became homeless after fleeing their villages with ill-fated parents. Many of them left for neighbouring countries like Thailand and India. It excludes another few hundreds of thousands of Rohingya children, who had to flee their native places after the Burmese military’s crackdown before the Covid-19 (also the coup) hit the country and they mostly arrived in south Bangladesh.

Unconfirmed reports claim that nearly 2000 personnel belonging to Tatmadaw and their supporters (termed as army informers) also lost their lives during the offensive of People’s Defence Forces (indicating the group of anti-junta armed agitators) in different localities. Incidents of armed clashes between security personnel and ethnic militant outfits also continue to grow with more intensity across the country.

The military personnel even launched indiscriminate aerial offensives and continued arson in the populous villages. They have targeted offices, hospitals, schools, prayer houses, etc forcing over 4,00,000 villagers to escape their native places. Most of the frightened
residents left their places with family members because of aerial attacks from military jets and helicopters in various places.

Even a Burmese national, later identified as Ko Aung Aung (20), self-immolated in Mandalay of central Myanmar on 1 February as the agitating people across the country observed a silence strike (deserting streets from 10 am to 4 pm) on the day protesting against the military rule. A sheet of paper, where it was written in Burmese as they cannot go back to the past, was recovered near to Aung, who set himself on fire in Kyaukpadaung town of Mandalay locality. Soon he succumbed to injuries in the hospital.

Lately, United Nations secretary-general Antonio Guterres commented that he stands in solidarity with the people of Myanmar and for a return to an inclusive, democratic society. The multiple vulnerabilities of all people across Myanmar and its regional implications require an urgent response, said Guterres adding that humanitarian access to people in need is critically important for the UN and partners to continue to deliver on the ground. Moreover, armed forces and all stakeholders must respect human rights and fundamental
freedom, asserted the UN chief.

Earlier on 6 December 2021, the UN General Assembly unanimously adopted the recommendations made by the UN credentials committee to defer the decision on who would represent Myanmar at the UN. It dishonoured credentials of the Myanmar military regime and rejected the junta’s appeal allowing U Kyaw Moe Tun, the current permanent
representative of Myanmar, to continue representing the country at the influential global forum. 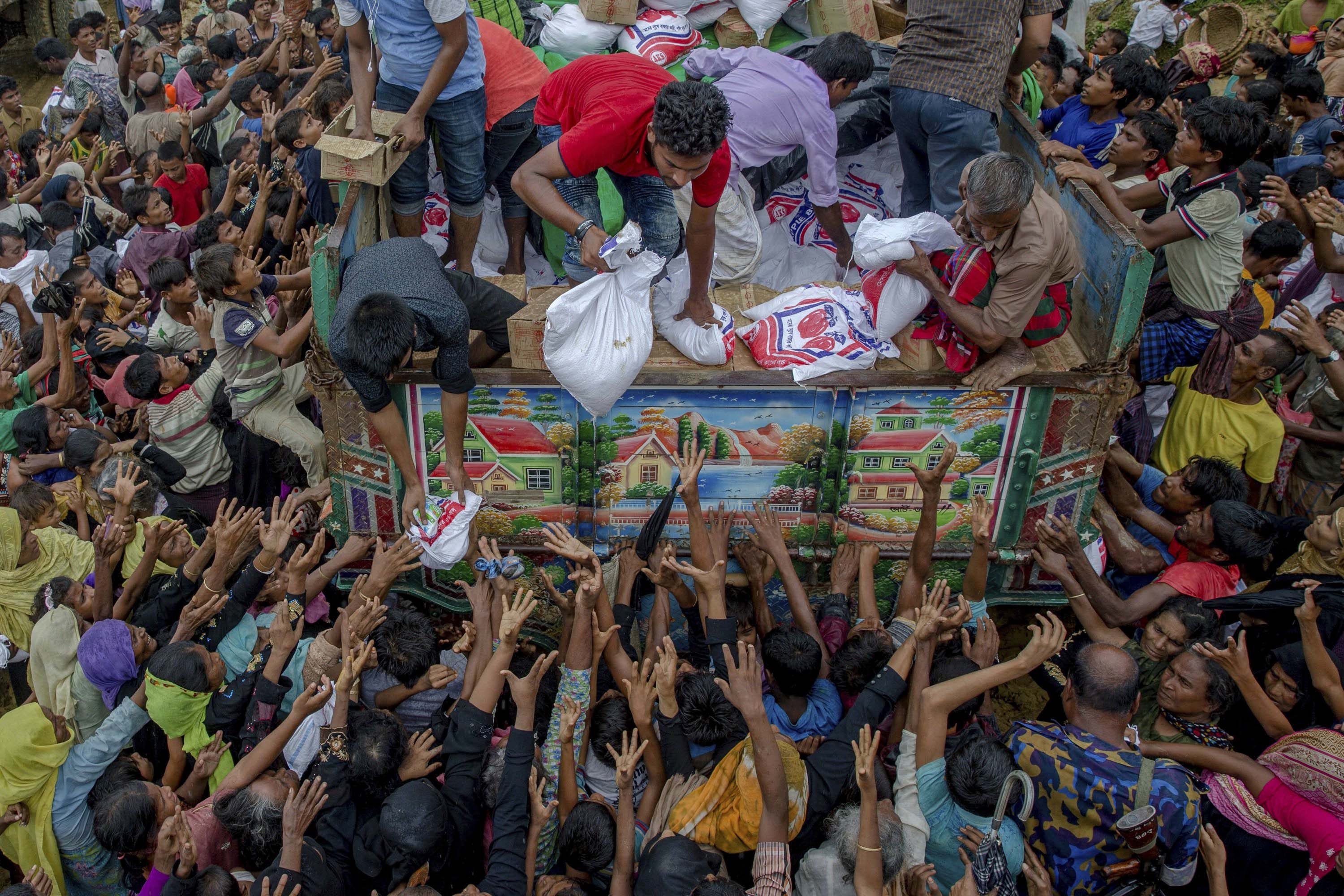 The Burmese generals, who grabbed the political power last year claiming fraudulence in November 2020 general elections (where Suu Kyi-led NLD emerged victorious and was about to resume new government functioning from 1 February just before it was ousted), initially declared emergency and then promised to bring back a multi-party democracy with fresh elections by 2023. Simultaneously, the generals tried to attain recognition from various powerful and democratic nations around the world.

On the ground, a National Unity Government (NUG), formed by the Parliamentarians (mostly NLD lawmakers) continues trying to garner public support and also assurance from the international community. Not to speak of other outside political forums, the Association of South East Asian Nations (ASEAN) has failed to support the unity government. Shockingly, the chair of ASEAN (Cambodian Prime Minister Hun Sen) even recently visited Myanmar and met with its dictator Min Aung Hlaing.

Hun Sen’s official visit to Myanmar and his meeting with the Burmese dictator attracted strong reactions from the pro-democracy forums in the region. Charles Santiago, chairman of ASEAN Parliamentarians for Human Rights (APHR), asserted that the ‘joint statement released by Hun Sen with Min Aung Hlaing was a misguided and dangerous attempt to
deceptively portray a breakthrough’. “It is a brazen attempt by these two coup leaders to hijack ASEAN for their own authoritarian purposes, undermining the Myanmar peoples’ fight for democracy and human rights,” added the Malaysian Parliamentarian.

Khin Ohmar, an exiled Burmese activist, pointed that Hun Sen ‘should know better, having lived through the Khmer Rouge genocide, than to act as an accomplice to the Myanmar junta that is accused of genocide, crimes against humanity, and war crimes’. Speaking to this writer from an undisclosed location recently, she questioned, “Has Hun Sen forgotten the millions of Cambodian people who suffered through their own genocide?”

The founder of Progressive Voice, a forum for democracy and equal rights to citizens, added that Hun Sen and the junta’s attempt to deceive the world that they are making progress to resolve the situation is blatantly dishonest, and Myanmar people are not fooled by it. Hun Sen’s hijacking of ASEAN through its chairmanship should not facilitate continuation of the junta’s own killing fields against the people of Myanmar. Terming it as unacceptable, Ohmar insisted on revamping the Myanmar National Human Rights Commission, which is still functioning under the control of military generals. “Burma’s junta continues to escalate violence as the military dictators desperately seek to gain control over the country. It is also imperative that various foreign governments and other bodies extend sanctions to cut the flow of resources to the junta so that the unarmed civilians can be protected from harassment,” said Debbie Stothard, the founder of  ALTSEAN-Burma, a network of  organizations and individuals dedicated to working for human rights and democracy in ASEAN member States.

Speaking to this writer from a bordering Burmese town, Stothard also added that the NUG government and also concerned civil society groups are asking for sanctions on Myanmar Oil and Gas Enterprise (MOGE), which provides a sustained huge revenue to the junta and it has not yet been sanctioned by any country. She also informed that Canada, the US and UK recently enhanced sanctions and prior to them, Chevron (USA), Total Energies (France) and Woodside Petroleum (Australia) announced their divestment of operations in Burma.
Days back, the Women’s League of Burma expressed concern over the arrest of Thin Thin Aung, one of its founder members, who also once raised multimedia organ Mizzima news along with her husband Soe Myint.

Some 120 journalists were also detained from different parts of Myanmar and over 40 are still behind bars. At least three Burmese journalists (photojournalist Ko Soe Naing, reporter Sai Win Aung and editor Pu Tui Dim) have lost lives because of the military atrocities
in the recent past, informed Mizzima editor Myint from a hideout. The anti-junta agitators, on various occasions, have been urging the international community to impose a complete arms embargo to the military rulers along with the restriction on aviation support to them. The pro-democracy activists also appealed to various democratic nations like Japan, Australia, India, Malaysia, South Korea, etc to cease financial trades with the Burmese junta. Some other nations like China and Thailand, who have invested in Myanmar oil and natural gas sector, are also approached by them to rethink their business interests with the junta.

Myanmar’s powerful and democratic western neighbour has not made any strong comment against the junta except New Delhi recently made a statement saying that India is disturbed with the developments in Myanmar as well as the imprisonment of Suu Kyi. Meanwhile, thousands of Chin families from Myanmar crossed over to Mizoram in far-eastern part of India. Mizoram had already given shelters to over 60,000 Chin refugees in various hilly localities and the Aizawl administration has stepped up its urgent humanitarian assistance to those asylum seekers.

Alarming news also came for India (from inside Myanmar) that some north-eastern insurgent outfits (including PLA and ULFA) have joined hands with the Burmese government forces against the agitating natives. It is understood that the banned separatist north-eastern armed groups might have faced tremendous pressure from the Burmese militaries to stand against the pro-democracy Burmese nationals with an aim to sustain their hideouts inside the jungles of northern Myanmar. So New Delhi has a difficult issue to deal with the ongoing Myanmar troubles considering the nation’s interest in the eastern front. 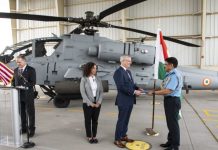