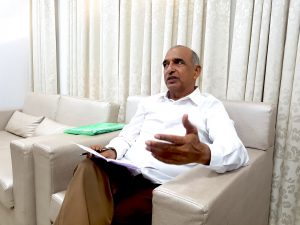 The Chief Minister of Haryana Manohar Lal announced 5320 projects just to get appreciation from the public. This was revealed by Sampat Singh, former Member Parliament, and a senior Congress leader today at Chandigarh. Addressing the media he said that from 8 November 2014 to 09 July 2018 the total cost of all the projects was estimated to be 28246 crores but nothing has been done in this regard so far. Since forming of the BJP Government for last 4 years till now 4998 crores has been spent which is 17.69 percent of the total amount. Sampat Singh procured the information of the 898 projects which have not commenced till date right from CM cell on July 13, 2018. These 1931 projects budget was 15937 crore which is untouched till date.

He clearly stated that now the Government should seriously start working for the development of the people and not only take interest in cultural programs. When asked about from where would he be contesting the election he said I have left it on the Congress Party.

He has taken the bull by the horns by penning down all the projects promised by Haryana CM in the last 4 years of his leadership. Some of which are not fulfilled and others which have not been started till date. He sums up all by telling CM Manohar lal, “please be serious” and start working instead of announcing projects and attending cultural programs.