The partners, BJP-PDP, have differed sometimes bitterly over most aspects of the governance in the state, but, still have gotten along. However, that hardly means the alliance faces no threat to its survival in the next two years — it does.

The alliance could still break up under the weight of its contradictions. All the same, there is every chance that it could make it to the full term, held together by one overriding factor that has saved it so far-lack of an alternative.

In the last Assembly election, the majority Hindu community in Jammu province voted en masse for the BJP, giving it 25 out of the province’s 37 seats, thus making the Hindu nationalist party a major political actor in the state and a compulsory part of the state’s governing structure.

But in the Muslim majority Valley, the much-fancied PDP pulled off just 25 of the 46 seats, with others being divided up unevenly among the National Conference, Congress, People’s Conference, Awami Ittehad Party and the CPM. The PDP was helped along to its final tally of 28 by its wins in three seats from the Muslim-majority areas of Jammu.This made a PDP-BJP coalition as the only best possible political arrangement for the state. With BJP almost sweeping Jammu, a new state government could only leave it out at its own peril. For, this would not only keep an entire region out of its due share in political power, a trigger for a destabilising regional discord, but, also, the BJP backed by its own majority government at the centre.

“How do you deal with such a hung verdict? What other alternative was there?” asked J&K Government spokesman and the Public Works minister, Naeem Akhtar. “In a democratic set up all regions of the state should get a share in the power proportionate to their representation. And, when a region largely rallies round a particular party, you can’t deny power to it.”

But, as the past four years of the PDP-BJP coalition have underlined, while the logic of their respective mandate may have brought them together, the arrangement hasn’t led to good governance. Nor in any way have helped the tide over the state’s political and communal fault-lines, as the ongoing polarisation over the rape and murder of an eight-year-old girl in Kathua would have us believe. The issue has taken on a strident communal dimension and the BJP, despite being a ruling party, has only aggravated the situation by its ambivalent stance towards the crime and accused. It was only after the intervention of the Supreme Court which has decided to monitor the trial in the case that some sanity has been restored.

Similarly, the BJP has gone against the call made in an all-party meeting in Srinagar on April 9 for a unilateral ceasefire in the state during the period of Ramadan and Amarnath Yatra. “No leniency should be shown towards militants. At this stage, we can’t give an escape route to militants and any opportunity to regroup,” state BJP spokesperson Anil Sethi said. “The militants are on the run and would be wiped out soon.”

The BJP had earlier participated in the all-party meeting and its leader and the J&K Deputy Chief Minister, Kavinder Gupta, stood by the side of Chief Minister Mehbooba Mufti when she made a call for a ceasefire during interaction with the media following the meeting.

“There is no doubt we have fundamental differences in our political and ideological stances, but, despite that, we have tried to make this government a success,” said a senior PDP leader. “It will be our effort to manage our differences in the next two years too. If anything that our state can’t afford under any circumstances is for this alliance to break.” 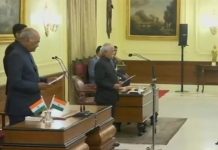