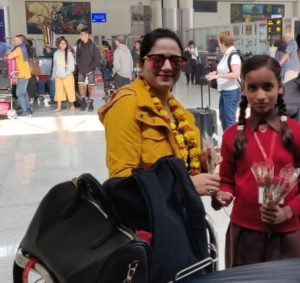 NRI guests from all over the world have started to be the part of Pravasi Bharatiya Divas (PBD) 2019 at Varanasi. Upon arrival, they are being welcomed in traditional ways by kids of various schools at Lal Bahadur Shastri International Airport. The will of most them is to reach to the famous Kashi Vishwanath Temple. Many guests from Indonesia, Malasiya, Mauritius, USA, UK and other countries were seen spiritually mesmerized when they reached Kashi Nagari and especially when they reached to bow with obeisance before Baba Bholenath at world famous Kashi Vishwanath Temple.

This year, there are over 5800 NRI guests from over 125 countries who got them registered for PBD participation, said the Varanasi Authorities.

According to the Vice chairman of Varanasi Development Authority,  Rajesh Kumar, the nodal officer looking after stay arrangements of PBD guests, told that contrary to the common perception, most of the guests who registered for PBD 2019 are from USA and not from Mauritius and other such countries where Indians had migrated centuries ago. He further apprised that there are three types of stay arrangements for the PBD guests. First is ‘Shri Baleshwar Agrawal Prawasi Nagar’ at Aidhey village popularly known as the ‘Tent City’ where 1480 guests are being accommodated. The second is the blocked hotel rooms of Varanasi where around five thousand guests will get standard accommodation and the third is ‘ Kashi Atithya Yojna’ under which nearly 400 guests will reside with the citizens of Kashi in their homes.