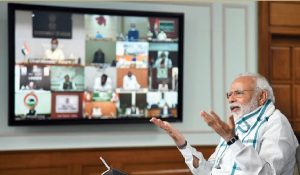 Managing the crisis of an unprecedented nature like the outbreak of Covid-19 that has affected almost the entire globe requires far-sighted vision, well-concerted long-term strategy and availability of sufficient resources to deal with that crisis. As of the closing hours of April 17, Covid-19 has claimed a toll of 153,818 human lives in different parts of the world, with the United States reporting 37, 242 deaths, followed by Italy reporting 22, 745 deaths, Spain reporting 19, 613 deaths, France reporting 18, 681 deaths and death toll of the United Kingdom then stood at 14, 576. Other countries like Germany, Belgium, Netherlands, Iran have suffered death tolls in four digits thus far and this number is increasing day-by-day.

As of April 17, India had thus far conducted 335,123 tests of which 14, 350 reported positive cases. India has thus far suffered 486 deaths along with 2,041 having recovered from the pandemic. The number of active cases stands at 11, 825. The first case of Covid-19 in India was reported on January 30 this year in Kerala and by early February this number increased to three persons in Kerala and by that time the country didn’t take it seriously. However, as early as on February 12, Congress leader Rahul Gandhi had raised the alarm about the impending Covid-19 crisis but his suggestion was not taken seriously. By March 15, the number of confirmed Covid-19 cases had crossed 100-mark.

A couple of days later on March 22, Modi government woke up to the magnitude of the problem of Covid-19 and Prime Minister Modi called upon the nation to observe a 14-hour voluntary public curfew and subsequently on March 24, Prime Minister ordered a nation-wide lockdown for 21 days. Being in the habit of hurling surprises like demonetization, PM Modi declared on March 24, a 21-day long lockdown with just four hours’ notice from midnight onward, without any pre-planned strategy and failing to plan for the impact of his announcement on India’s vast informal economy. In this regard, Rahul Gandhi tweeted that he was feeling sad because that was completely avoidable: “We had time to prepare. We should have taken this threat more seriously and have been much better prepared.”

When on March 26, Modi government unveiled a 1.70 lakh-crore economic package entailing free food grain and cooking gas to the poor for the next three months, one-time doles to women and poor senior citizens to contain the impact of nationwide lockdown, Congress leader, while welcoming the financial package, hailed it as the first step in right direction.

Almost a week after the clamping down of a 21-day lockdown, Rahul Gandhi, in a letter addressed to PM Modi, calling attention of the PM to India’s unique conditions comparable to other large countries that were following a complete lockdown, emphasized on taking different steps. Pointing out that the number of poor people in India that were dependent on a daily income was simply too large for the country to unilaterally shut down all economic activity, Rahul Gandhi cautioned that the consequences of a complete economic shutdown could disastrously amplify the toll taken by the Covid-19.

Calling upon the government to consider a nuanced approach that takes the complex realities of Indian people into consideration, Rahul Gandhi emphasized on according priority to protect and isolate the elderly and vulnerable from the virus, providing big dedicated hospitals with adequate beds and ventilators for large population centres, making available personal protection equipment (PPE) and masks for health workers and dramatically increase the number of tests to get an accurate picture of the spread of the virus. Interesting, it was at this stage on Mach 30, just a week past the 21-day long lockdown that Rahul Gandhi had written: “I suspect that the government will eventually extend this lockdown even further”, and it eventually happened on April 14 when Modi government extended the lockdown till May 3.

Reacting to the manner in which lockdown was being implemented without making any adequate arrangements for huge migrant labour population scattered over different parts of country in terms of arranging for their stay, food and ration and pushing them back home, the former Congress president said on April 2 that India needed to adopt a country-specific strategy and prepare the country for impending economic consequences, and not blindly follow what other countries were doing. He emphasized that India had to fight the global pandemic with an India-centric strategy.

While responding to PM Modi’s appeal to people in his telecast to the nation on April 4 to light lamps and shine torches on April 5, Rahul Gandhi in a tweet said on April 4 that making people clap and shine torches in the sky was not going to solve the problem and emphasized that what the country needed was more testing to be conducted in the country to contain the spread of coronavirus.

At this stage, Congress party urged the central government to empower states in their fight against Covid-19 by providing them with more financial and medical resources. Modi government was also called upon to take the state governments on board while evolving strategies to fight the global pandemic.

In the immediate aftermath of the beginning of the second phase of lockdown (April 15-May 3), Rahul Gandhi on April 16 mooted a slew of suggestions on how Modi government should combat the Covid-19. Suggestions mooted by Rahul Gandhi inter alia include: decentralization of resources to fight Covid-19; more powers to state CMS to handle Covid-19; exponential expansion of Covid-19 testing; dividing the country into Hotspot Zones and Non-hotspot Zones and aggressive testing in Hotspot Zones; in order to meet the economic backlash of Covid-19, create a food net and implement NYAY scheme to provide financial help to the poor; and protecting big strategic companies and creating a defensive package for MSMEs. The former Congress leader, while mooting these suggestions, made it clear that it was the interest of the people of India that was supreme and that needed to be protected.

Going by the tone and tenor of suggestions made by Rahul Gandhi since the outbreak of Covid-19, there seems less of politics and more emphasis on pragmatic nature of implementing these suggestions.

Saving the lives of the people from the pandemic as well as saving the livelihoods of the people are the top priorities of the government as well as all Opposition parties at this critical juncture. Rahul Gandhi’s repeated emphasis on augmenting the rate of testing has not seemingly caught adequate attention of the concerned authorities.

Example of South Korea can be emulated because the timeline of South Korea’s response to Covid-19 is one of the efficient containment strategies now acknowledged globally. Detection of first Covid-19 cases were almost simultaneous in South Korea and the United States during the third week of January this year. South Korea acted swiftly by jump starting the production of test kits and facemasks and proceeded to test more than 20, 000 people daily in the month of February itself whereas the US proved to be late starter and is now facing serious consequences.

Effective testing and contact tracing have proved to be effective measures to contain the outbreak early. As some experts have pointed out, pervasive testing, comprehensive contact tracing, and persistent social distancing are precisely what will be required in order for portions of the economy to recover and safely reopen and India at this critical need this.

This crucial phase has proved Rahul Gandhi to be the best advisor from the rival camp for Modi government because Rahul Gandhi’s criticism of Suit-Boot Ki Sarkar forced Modi to project his pro-poor image and in these trying times, once taunted as Pappu by Modi supporters, has emerged as the one offering statesman like advice.