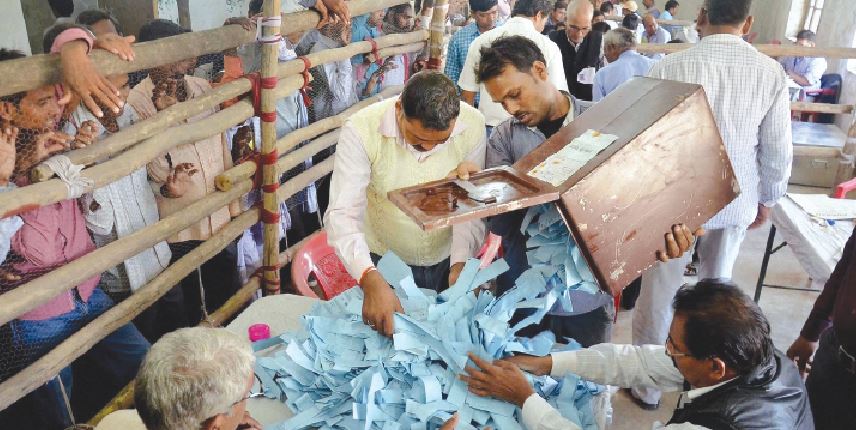 The three-tier Panchayat elections in Uttar Pradesh added fire to the second surge of Covid-19, badly affecting disadvantaged rural areas taking tragic toll of thousands of villagers and government officials deputed for polling and counting duty due to non-availability of adequate and immediate medical support systems. The political ambitions of ruling Bhartiya Janata Party (BJP) proved fatal for its fortunes as it failed to win over majority of Panchayat heads. The mandate reflected farmers annoyance against the party’s stand over the ongoing farmer’s agitation.

Amid pandemic these elections proved fatal as villages too have come in the grip of Covid-19 virus and thousands died due to outbreak of unchecked rapid infections among the rural folk. Many villagers called it mysterious fever or divine curse. Many villages saw overnight death of entire hale and hearty families where nobody was left behind to perform their last rites.

Floating mutilated 71 bodies were recovered from downstream of Ganga river in the geographical territory of Uttar Pradesh and Bihar boarder evidenced such mishaps. This further revealed the risk of spread of pandemic. Now police are guarding banks of rivers stopping disposal of dead bodies into it.

The gravity of situation could be gauged after the death of more than hundred deaths of winner candidates resulting in by-poll at 99 places. This time hundreds of employees, including newly appointed youngers, on poll duty died after contracting Covid-19 infection amid sudden surge of pandemic. The exact numbers are yet to be consolidated from 75 districts of the state but definitely this time causalities are much higher in numbers as compared to last elections. Sometimes poll staff suffer sudden cardiac arrest while on duty or meet accidental deaths.

Examining the status report about the paralytic medical services to meet the second surge of Covid -19 pandemic allegedly aggravated in wake of violation of covid protocols in recently held Panchayat elections, the Allahabad High Court opined that compensation must be at least one crore for death of those poll officers who died due to COVID-19 while performing election duties during UP local body election, as it was mandatory for them to perform their duties.

Though the govt enhanced compensation as 30 lakhs but the High Court felt that the compensation amount is too little and must be 1 Crore. “To compensate the loss of life of the bread earner of the family and that too because of the deliberate act on the part of the State and State Election Commission to force them to perform duties in the absence of RT-PCR support, the compensation must be at least to the tune of 1 Crore”, suggested the bench comprising Justice Siddhartha Varma and Justice Ajit Kumar in their detailed order hearing a Public Interest Litigation.

Prime Minister Narendra Modi’s parliamentary constituency Varanasi witnessed decline of its graph where the BJP secured just seven seats out of 40 zila panchayat member seats and its adversary the Samajwadi Party won 15 of these seats. The growing infight and waning organisational strength at the grassroots level is being blamed for such debacle in Varanasi. Political observers are really surprised over the fact that BJP could not open its account in its stronghold blocks like Harhua, Bargaon and Araji. Perhaps, BJP leadership failed to clench negative impulses from earlier humiliating defeat in December last year in the parliamentary constituency of Prime Minister Narendra Modi at the hands of the Samajwadi Party in the Legislative Council Election (MLC) elections. Samajwadi Party won both the MLC seats of teachers’ and graduate’s constituencies electing its candidate Lal Bihari Yadav and Ashutosh Sinha. Chief Minister Yogi Adityanath equally failed to perform better as BJP won just 20 of the total 68 zila panchayat member seats in his bastion Gorakhpur. The failure of the BJP organisation to check rebellion activities is being blamed for poor show as they contested four seats as independents and defeated the official candidates. Dismissing such blame, the district president BJP, Yudhishthira Singh, clarified, “The party selected the candidates for the zila panchayat elections with full transparency. We in fact gained eight seats this time as compared to the 12 seats in the previous panchayat elections.”

Results from the temple town of Ayodhya were shocking where the BJP won just eight seats out of 40 district panchayat seats and the Samajwadi Party won 24 seats. The Bahujan Samaj Party (BSP) also won five. The temple town is considered to be nerve centre of Hindutva plank of the BJP where Prime Minister Modi and Rashtriya Swayam Sevak Sangh chief Mohan Bhagwat laid down foundation of magnificent Ram Temple last year.

Besides the construction of the temple large-scale development work could not muster support for the BJP in rural areas.In Mathura, the Bahujan Samaj Party sources have claimed to win a maximum of 12 seats while Rashtriya Lok Dal has claimed to win eight seats while BJP seems to be winning just nine seats as of now. The Samajwadi Party has claimed to win one seat while three independent candidates have also won. The farmer’s agitation is considered to be damaging cause for its defeat.

Despite engineering factions among Samajwadi family, BJP yielded no result in the stronghold of Mulayam Singh Yadav, where his niece Sandhya Yadav recently joined BJP and contested Panchayat election from Gheor in Mainpuri district of western Uttar Pradesh. Sandhya was district panchayat president from the SP. The SP-backed candidate, Pramod Kumar defeated her on the strength of committed electorate that feel indebted to Mulayam for his developmental contribution in public life.

The State Election Commission said over 3.19 lakh candidates were elected unopposed in the panchayat election. Votes were being counted to declare results for over 3.27 lakh panchayat posts. The rest of the posts remained uncontested, the commission said. The UP Primary Teacher Sangh put in its appearance through counsel before apex court. “Due to pandemic conditions in the state, more than 700 teachers have died since the beginning of poll training till polling and many members fell ill while performing poll duties. The toll may rise after counting but the apex court allowed counting by imposing curfew to avoid crowding but it was hardly obeyed resulting in addition in numbers of deaths,” said Sanjay Singh, General secretary of the Sangh.

The Uttar Pradesh panchayat election held in the middle of a second wave of the Covid-19 pandemic when the cases of coronavirus infections kept on rising in an unprecedented manner experiencing acute shortage of hospital beds, oxygen supplies, lifesaving emergency medicines, ventilators, respiratory devices and vaccination drive has fallen awfully short to meet growing demand. In aftermath of elections the BJP government inherited countless un told miseries and unaccounted deaths of thousands of its innocent citizens in the pandemic.