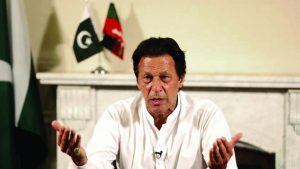 No wonder that any civilian prime minister of Pakistan has completed five-year tenure and there have been no less than 30 prime ministers since its inception. Besides, it has seen 15 presidents and three constitutions during the period. It is now only the second time in its history that a civilian transition has taken place.

All through the campaign for the recently concluded elections, it was obvious that the army was backing the Pakistan Tehreek-e-Insaf (PTI) led by cricketer-turned-politician Imran Khan. Therefore, the outcome of the elections to Pakistan National Assembly offered no surprise. Imran Khan had not only positioned himself as aligned to the army and was speaking its language, he had been projecting his arch-rival, Nawaz Sharif of Pakistan Muslim League-Nawaz (PML-N), as pro-India and anti-Army. Even on the day of the polling, he had gone in the record to say that Nawaz Sharif has “interests of India” in mind rather than that of Pakistan.

It is known fact that Nawaz Sharif had been trying to assert himself when he was the prime minister. This was not to the liking of the powerful army establishment. The manner in which he was made to resign as prime minister and was barred from contesting elections or holding any public post for life made it apparent that he was being eased out deliberately. The charge against him was that he had not declared in his income tax returns that he might get some money from a company floated by his son. He had neither received the money nor were there any charges of corruption against him yet the country’s highest court held him guilty under Shariat law for not being truthful and honest. This rendered him ineligible for the post of prime minister and forced him to quit the office. It was widely believed that the army had engineered the action through the judiciary and that it was a “judicial coup”.

As if it was not enough, the National Accountability Commission decreed that he had bought apartments in London from “unaccounted money” and sentenced him to 10 years in jail. His daughter Maryam, who was also considered his heir apparent, too was given a seven-year jail term. This followed exposure through “Panama Papers” which had pointed that apartments were bought by the Sharif family out of illegal money stashed abroad. Again no corruption charge was proved against him.

His disqualification to contest for any public office and jail sentence became a major issue in the elections. In fact, he took a major gamble to evoke sympathy vote by landing in Pakistan on the eve of the elections after leaving his ailing wife in London. He and his daughter Maryam were arrested as soon as they landed in Pakistan. However, the gamble failed to pay off and his party lost the election. He is now likely to cool his heels in jail for a long time to come.

While the PML continues to hold considerable hold in the Punjab province, which dominates the politics in the country due to its sheer size and number of seats at stake, the hold of the Sharif family is likely to weaken with the defeat of his younger brother and former chief minister Shahbaz Sharif. He was being projected as the prime ministerial candidate if the party had won the National Assembly elections.

The victory of Imran Khan and his party may appear to be comparatively more favourable for India because of his familiarity with India and Indians. No other prime minister of Pakistan had visited or lived in India for such a long period as Imran Khan. As a national cricket player and then as captain of the national team he had been frequenting India and has a wide circle of friends and admirers. Even after his cricketing career, he had been visiting the country an expert commentator.

He had been a big votary for improving relations between the two countries and had been suggesting regular cricket tournaments, on the lines of Ashes Cup between England and Australia, to strengthen the ties.

However, there was a distinctive change in his stance towards India during the election campaign. He criticised India and accused India of doing everything to weaken the Pakistan army. He said Nawaz Sharif was also trying to do the same by admitting Pakistan’s role in the Mumbai attack. He also went on about of India-bashing which was not entirely unexpected.

During the run up for the elections, India was not in the main focus of campaigning as had been the case in the past. All the three major parties in the fray called for dialogue with India and reiterated the demand for resolution of the Kashmir issue as per the UN Security Council resolutions.

The two main rivals of Pakistan Tehreek-e-Insaf led by cricketer-turned-politician Imran Khan, the Pakistan Muslim League-Nawaz and Pakistan Peoples Party (PPP) lead by Bilawal Bhutto Zardari, have alleged mass rigging and interference of the Army behind their defeat. They have ‘refused’ to accept the result but there is little else they can do. The army had tried and tested the two parties for long and wanted to back someone who would remain under its pressure. It remains to be seen whether Imran Khan, with all his experience and international exposure, would over the time try to push reforms and mend fences with India. It is unlikely till the time he finds his political feet.

Mumbai attack mastermind Hafiz Saeed, an internationally declared terrorist, had put up about 265 candidates for the National Assembly and provincial legislatures under the banner of Allah-o-Akbar Tehrik (AAT). His son and son-in-law were also among the contestants. The party drew a blank which reflects lack of mass support for such terrorist groups. The party was also backed by the army but the overwhelming public opinion against it should serve a lesson that ordinary people abhor violence and want peace.

Imran Khan is aware that he can’t hope to survive for long without the help and support of the army and shall have to, therefore, undertake a delicate balancing act. It is for this reason that India cannot expect any major policy shift in the near future.

While Imran Khan needs time to settle down and needs to find his feet, India cannot expect any major policy shift as regards to its relations with Pakistan. Thus while there is a change in government in the neighbouring country, there is no “regime change” and India would need to keep its fingers crossed over chances of improving relations with it.