External Affairs Minister Sushma Swaraj on December 12 has said that India has repeatedly called upon Pakistan to immediately vacate all the areas under its illegal occupation and it made this assertion to Islamabad last month as well.

In Lok Sabha EAM Swaraj said, India’s “consistent and principled” position is that the entire state of Jammu and Kashmir has been, is, and shall be an integral part of India.

“We have repeatedly and consistently called upon Pakistan to immediately vacate all areas under its illegal occupation, most recently on November 30, 2018,” she added.

The EAM in her written reply said, “Under the so-called ‘Boundary Agreement’ signed between China and Pakistan on March 2, 1963, Pakistan illegally ceded 5,180 sq km of Indian territory in Pakistan-occupied Jammu and Kashmir to China.”

Pakistan has been in illegal occupation of approximately 78,000 sq km of Indian Territory in the state of Jammu and Kashmir. 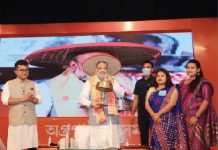