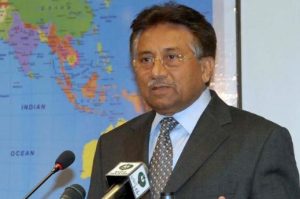 Former Pakistan President Pervez Musharraf on Wednesday said that the Jaish-e-Mohammed was a terror outfit and his country’s intelligence agency was hands in gloves with JeM to carry out attacks in India during his tenure.

Musharraf made this stunning disclosure in a telephonic interview to a Pakistani journalist on Hum News.

Welcoming the action against the Jaish-e-Mohammed, Musharraf said that this was a right move by the Pakistan government since he has been asserting for a long time that these are terrorist organisations.

Musharraf said that the assassination attempt on him in 2003 was carried out by JeM and for him, Jaish will always remain a terrorist organisation.

Meanwhile, Pakistan Major General Asif Ghafoor on Wednesday claimed that Jaish-e-Mohammad does not exist in Pakistan. He added that the JeM has been proscribed by the United Nations and Pakistan.

The JeM, led by Masood Azhar, is accused of numerous attacks in India, including the February 14 Pulwama attack which killed at least 40 Central Reserve Police Force soldiers.