At least 65 people were killed and several others were injured on Thursday after a massive fire broke out on a Pakistani train.

According to the reports, a gas canister passengers were using to cook breakfast exploded in train.

The fire destroyed three of the train’s carriages near the town of Rahim Yar Khan.

The injured were being rushed to nearby hospitals.

The Tezgam Express was on its way from Karachi to Lahore when the fire broke out.

“Terrible Tezgam train tragedy with gas cylinder carried by passenger exploding. Prayers and condolences go to the victims families. A tragedy that could have been avoided but ever since I can recall while travelling by train no baggage check or restrictions enforced. Tragic,” tweeted human rights minister Shireen Mazari.

Prime Minister Imran Khan expressed grief over the incident and have ordered an immediate inquiry.

“Deeply saddened by the terrible tragedy of the Tezgam train. My condolences go to the victims’ families & prayers for the speedy recovery of the injured. I have ordered an immediate inquiry to be completed on an urgent basis,” Khan said in a tweet. 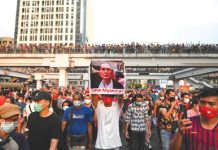