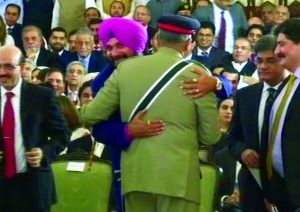 Cricketer-turned-politician Navjot Singh Sidhu, also known for his quick repartee and a judge at comedy shows, has a knack of getting into controversies. To his credit, he has been hitting headlines in all his various avatars either by design or otherwise.

His latest action which kicked up a controversy recently and led to far reaching consequences was perhaps something even beyond his own imagination. Although almost everyone known to him was expecting him to make waves during his visit to Pakistan to attend the swearing-in ceremony of his cricketing days’ friend Imran Khan as prime minister of Pakistan, the ripple effect of his visit would be felt in the subcontinent for a long time to come.

There were two aspects of his short visit to Pakistan which attracted media and government attention. He had taken all permissions, including from the government of India and his immediate boss, Punjab Chief Minister Capt Amarinder Singh, to visit the neighbouring country. As an elected legislator he was bound to do so. The other two invitees, Sunil Gavaskar and Kapil Dev, decided not to be present at their friend’s most important day.

The first aspect was that he was made to sit next to the ‘president’ of the Pakistan Occupied Kashmir, Masood Khan. Here he deserves the benefit of doubt because like most Indian leaders he wouldn’t have been familiar with his name or face. Secondly, as a guest he had to sit where was was escorted and couldn’t have chosen a seat. The Pakistanis should have been, however, more circumspect in reserving that seat for him given the sensibilities on the issue in India. He could have been seated with Imran’s other cricketing friends or with foreign dignitaries. So Sidhu can’t be faulted for his sitting next to a person whom probably he didn’t know.

It is the other aspect of the controversy, his hugging the Pakistan Army chief Gen Qamar Bajwa following his disclosure of opening a corridor to Gurdwara Kartarpur Sahib locates close to the international border, that hit a major controversy. Sidhu himself declared later that the hug was a spontaneous reaction to the proposal and as a Sikh he could not hold back his emotions.

While much was made about the hug by a section of Indian media and political parties like the Shiromani Akali Dal, it didn’t deserve that kind of hostile response. Sidhu had obviously neither absolved Gen Bajwa or the Pakistan Army for the atrocities against Indian soldiers nor had he committed a sin. In fact he would have caused a diplomatic gaffe if he had turned his back when Gen Bajwa was hugging him. He would have been accused of insulting the chief of army of the country which was hosting him. No doubt he later pointed to similar hugs by prime minster Narendra Modi when he landed unscheduled in Pakistan last year or that of former prime minister Atal Behari Vajpayee with the then Pakistan prime minister Nawaz Sharif.

While these were minor issues, the question is whether Pakistan was sincere about accepting a long standing demand of the Sikhs for a corridor to the Kartarpur Gurdwara located about three kilometres inside Pakistan territory.

For the Sikhs in particular and Punjabis in general the opening of a corridor to the holy shrine, where Guru Nanak Dev spent several years of his life and where he took his last breath, is a demand very close to their hearts. Thousands go the to international border from where one can see the Gurdwara on a clear day. Many say silent prayers for a visit to the Gurdwara even as they try to take a closer look with the help of binoculars. With the hasty division of land between India and Pakistan along the Ravi river, the Gurdwara was placed in Pakistan being on the right bank of Ravi. Pakistan has been allowing a small number of devotees each year to visit the Gurdwara but the numbers allowed are minuscule.

The corridor would involve well-guarded way from the international border between the two countries through which pilgrims could visit the Gurdwara and return by the evening without passports and without having to obtain visa.

Normally such a proposal would have been heartily welcomed by Shromani Akali Dal which claims to represent the Sikhs. In this case, because their political rival Navjot Singh was involved, they raised objections to his hugging the ‘enemy’ rather than welcoming the proposal. It was indeed ironic that the party did not welcome the move despite the fact that it emotionally concerned its prime constituency – that of the Sikhs. The Akalis even claimed that Sidhu was “pulled up” by external affairs minister Sushma Swaraj although Sidhu claimed that no such thing had happened.

The moot question is whether this proposal is feasible and whether it would be allowed to fructify. As far as practical aspect is concerned, it is possible to create a safe corridor is both India and Pakistan are sincere about it. However that is a big ‘if’.

There are already allegations that it was only a carrot that the Pakistan army chief had dangled and that Pakistan would rather keep the pot boiling. It would throw the onus on India and would actually attempt to create divisive feelings among the society. It must be noted that while Prime Minister Imran Khan has made no reference to the issue in his subsequent statements, his Interior minister has said that it was now for India to respond to the offer.

There are forces within Pakistan and India which would not like such a gesture to materialise without deriving any advantage. We have already seen how the Akalis, and their coalition
partner the BJP, has reacted on the issue. Instead of setting aside political differences over this particular, the coalition partners are not willing to let Sidhu take the credit. Similarly there are political and other forces in Pakistan who would raise objections to the proposal.

In fact the proposal has already suffered a serious setback due to the deteriorating relationship between the two countries. Initially India had agreed to a meeting between the foreign ministers of the two countries on the sidelines of a UN meet. Then India suddenly announced that it was withdrawing from the meeting in view of the attacks by Pakistan forces across the border and mutilation of bodies of some of the soldiers killed by Pakistan backed terrorists.

Pakistan prime minister reacted strongly to the cancellation of the meeting and tweeted that he was “disappointed at the arrogant and negative response from India to my call for resumption of dialogue”. That was understandable but he added, “However, all my life I have come across small men occupying big offices who do not have the vision to see the larger picture”.

It was a very harsh comment and was certainly in bad taste. The comment has ensured that the diplomatic doors have been firmly closed by him at least till the next general elections. This would entail that the issue of corridor for Gurdwara Kartarpur Sahib has also gone to the back burner.

That’s unfortunate and one does hope that the tempers would cool down before the 550th birth anniversary of Guru Nanak Dev next year and the two countries agree to open a corridor to the revered Gurdwara Kartarpur Sahib. It would be only then that Navjot Sidhu’s claim would see light of the day. 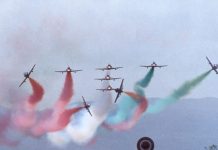