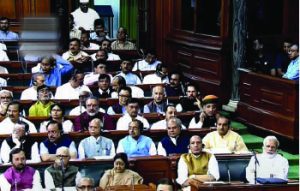 Undoubtedly, the outcome of the no-confidence motion against the BJP-led NDA government headed by Prime Minister Narendra Modi was a foregone conclusion. Nevertheless, it did afford an opportunity for the Opposition to take the government on crucial issues and concomitantly also an occasion for the Modi government to highlight its “achievements” as an anchor-sheet in run up to 2019 elections. Total 325 MPs backed the motion against 126 supports. Zero -record of abstentions after several members from Shiv Sena,  Biju Janata Dal and Telangana Rashtra Samithi left the house.

It was the first no-confidence vote in 15 years. The Opposition move for a no-confidence motion was disallowed by the speaker in the last Budget session of the Parliament. Perhaps, Modi government was ill-prepared to face such a move at that juncture in the wake of huge banking scams being fresh in the public memory. The no-trust motion literally became a parliamentary exercise for the ruling NDA and the Opposition to advance their respective electoral agendas in the run-up to the 2019 general elections.

Like Congress president Rahul Gandhi, representatives of many opposition parties took on the Modi government to task for not fulfilling its promises and ignoring the genuine demands of the people, especially the farmers, Dalits and women. While opening the debate, a TDP MP recalled various promises made to Andhra Pradesh that had remained unfulfilled and demanded grant of special status for his state. While supporting the TDP MP, Congress president said: “You are a victim of the fantastic 21st century political weapon and there are many other victims like you. This weapon is called the ‘jumla strike’. The farmers, Dalits, tribals, youths and women are also victims of this weapon.”

While recalling Prime Minister Modi’s promise of providing jobs to two crore youth every year, Congress president said that only four lakh jobs had been provided. Undoubtedly, PM Modi in his reply to the debate cited Mudra Yojana and other schemes as avenues of providing jobs; nonetheless, many experts regard this plea as contentious. While alluding to the case of Jay Shah, son of the BJP president Amit Shah, who has increased his income 16, 000 times within a short span, Rahul Gandhi said prime minister claimed to be a “Chowkidar” but he was a “Bhagidar.”

In his attempt to debunk Rahul Gandhi’s criticism that the NDA served the interests of big businesses at the cost of farmers and small businessmen, Modi asserted his government’s pro-poor stance and presented a long list of schemes that he felt would benefit all. However, some experts have termed it a poor defence of a strong criticism. In response to an accusation that the BJP’s policies and cronyism have led to an unprecedented burden on Indian banks as debt-laden companies defaulted, the prime minister sought refuge in blaming the entire crisis on the Congress.

PM Modi’s defensive speech against the no-trust motion spanning over 90 minutes was termed as a subterfuge by one critic because of its evasive intent of sidetracking major critical issues under the garb of statistical jugglery. Rahul Gandhi’s query on the price of Rafale aircraft failed to elicit any satisfactory answer either from the defence minister or the prime minister on the pretext of the secrecy clause in the Rafale agreement. Rahul Gandhi’s assertion that his talks with the French president didn’t reveal the existence of any such secret clause about the cost has been denied by the French government as well as Government of India. However, Rahul Gandhi has defended himself by saying, “I stand by what I said. Let them (France) deny if they want.”

Just like other BJP MPs who spoke through the day, the prime minister listed the “achievements” of his government, saying that they had been working for the marginalised. He touted about his government’s rural electrification programme, Ujjwala Yojana, Ayushman Bharat, agrarian policy. The bulk of his reply to the motion focused on attacking previous Congress regimes, as one expert puts it, “still in opposition mode despite having ruled for four years, the prime minister appeared convinced that highlighting the failures of the Congress before speaking about his own achievements was the winning hand to be played.” Modi attacked the opposition for being “pessimistic” and “misleading the public” through false propaganda.

In his speech, Prime Minister Modi staked claims and cited the same numbers that his part men have been touting for months and in many ways, his speech sounded repetitive. Some experts opine that most of the claims made by the BJP leaders have already become contentious. While he talked about his achievements, he did not touch upon many of the crucial issues that the opposition raised through the day. Some observers lament at the silence of prime minister over increasing mob lynching incidents, his vague answer on Rafale price, the security of Dalits and minorities. His dismissal of social concerns over demonetisation and GST as merely a part of the Opposition “pessimistic” politics is not being appreciated by some critics.

According to some analysts, the way the BJP leaders cleverly skirted concerns around demonetisations and GST is ironic as both were touted as the two most significant reforms India has ever seen. Demonetisation, once touted as the single most important decision ever taken to target black money is seemingly becoming ‘unfavourable’ even with the BJP because it has proved to be a big failure. Similarly, much-hyped GST is also losing sheen. Perhaps that is why during the debate, NDA leaders chose to not speak about either demonetization or the GST. Instead, it was the opposition that focused on both issues and stressed on the damage these two measures had caused to a large section of India’s population.

The Opposition’s persistent efforts in questioning the government on the deteriorating social fabric of the country could make the prime minister only pay lip-service to the crisis by saying that people who indulge in mob lynching should face strict action. There was no indication of any positive response to the Supreme Court’s directive of enacting legislation over mob-lynching. Concluding part of prime minister Modi’s speech was characteri sedby his old jibe against Rahul Gandhi, “naamdaar(entitled)” vs. “kaamdaar”. The Opposition was derided by him for lacking in numbers.

One expert has opined that even though Modi may have won numbers game in this battle, the optics did tilt in the eyes of many today and he and the BJP may still have cause to worry in the run-up to the 2019 elections. In the early start of his speech, Modi did mention that his campaign for 2019 general elections going to be as same as 2014 elections. According to one analyst, apart from attacking the Congress’s record, Modi’s references to Rahul Gandhi made his electoral plank clear in parliament — that BJP will again push for a presidential-style race with him leading from the front against a Congress leader who will be attacked for being immature, impatient and undeserving. Modi can be expected to advance his strategic campaign through a combination of the government’s achievements and nationalistic rhetoric.

The tone and tenor of the Opposition’s focus on the issues of farmers, Dalits, youth, small businessmen, women and vulnerable identity groups are likely to unfold the opposition campaign for 2019 elections. However, Rahul Gandhi’s “jhappi” with Modi in Lok Sabha immediately after concluding his speech reminds of Modi’s “huglomacy” and the Congress president is likely to respond to BJP’s blitzkrieg in the same coin in the run-up to 2019 elections. According to a media reports, the 2014 vote share of the parties voting for the government was 37 per cent compared to 43 per cent for the parties voting against the government and with less than a year to go before the Lok Sabha elections, this six percentage point difference represents the challenge that Narendra Modi still needs to surmount, notwithstanding the vote of confidence that he has just won comfortably.