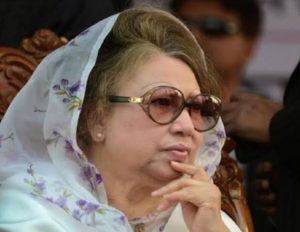 A Bangladesh court on October 30 doubled a jail term for imprisoned Khaleda Zia, the Opposition leader and former prime minister, from 5 to 10 years following a prosecution appeal.

The verdict came the day after Zia was ordered jailed for seven years in prison in another graft case piling pressure on the Opposition ahead of general elections.

Khurshid A. Khan, an anti-corruption commission prosecutor, reportedly said, “The High Court has upheld the lower court verdict and raised the jail sentence from original five years to 10 years.”

Zia still leads the Bangladesh Nationalist Party, the main Opposition party from behind the bars.

Attorney General Mahbubey Alam reportedly said, “She cannot contest the elections unless the conviction is set aside by a higher court.”