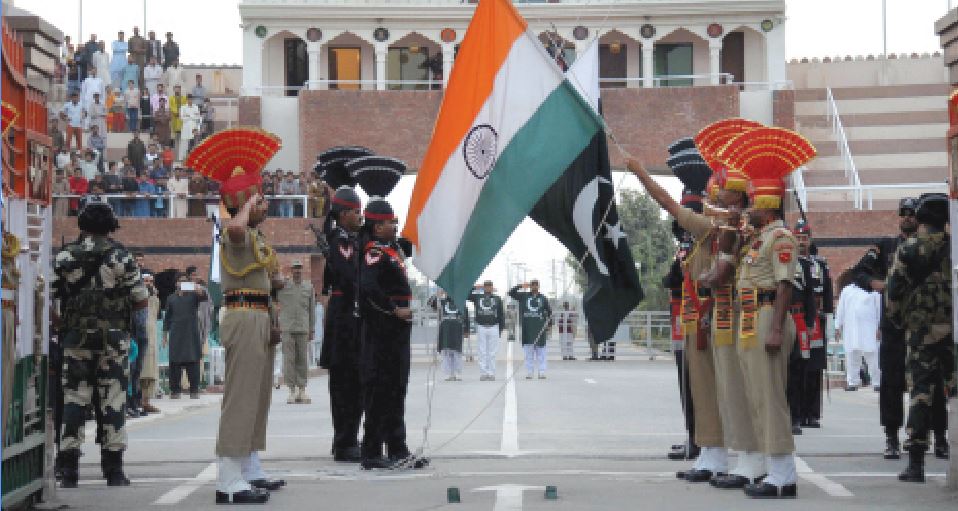 The dramatic developments in India’s immediate neighbourhood; an olive branch from a beleaguered, Pakistan, easing of tensions on the India-Tibet borders, and the US reaffirmation of India’s ‘legitimate’ role in the region, appear to have overwhelmed the recent weeks. The political-strategic developments during the third week of March 2021 are expected to script the new initiatives in the international relationships in the region from Afghanistan to the South China Sea.

Earlier, China had ended its nine-month-old standoff with India on the India-Tibet border. Within a few weeks of the end of the confrontation, Pakistan’s friendly gestures are hitting the headlines. Amidst these friendly echoes in India’s neighbourhood, the visit of the U.S. Secretary of Defence, Lloyd Austin’s visit to New Delhi has to be noted. It is quite significant.

Austin’s three-day stay is seen as a reaffirmation of the growing US-India strategic ties in the region. It may not be too ‘noisy’ against China but is expected to give a bigger role to India in Afghanistan’s peace process and rebuilding the US-Iran relationship. The four-country strategic alliance comprising Australia, Japan, the US and India (QUAD), a nascent initiative during President Donald Trump’s tenure is expected to be maintained under President Joe Biden. However, it will not be without much rhetoric against China. The US Defence Secretary’s meeting with Prime Minister Narendra Modi and later with his counterpart, Rajnath Singh and the External Affairs Minister, S. Jayashankar, and the National Security Adviser, Ajit Doval could be an effort to reassure India of the India-US ties.

Amidst these significant developments, the peace offers from the Pakistani army chief, Qamar Javed Bajwa, and his protégé, Prime Minister Imran Khan, are indicative of the peace possibility of the two estranged neighbours. The dilemma before the Indian leadership is due to the fragile government in Pakistan and even the all-powerful armed forces are facing the ‘wrath’ of the common people. Therefore, it may take a few weeks for India’s foreign office to respond to the Pakistani suggestion for a ‘stable relationship’. Another reason for India’s concern is the proposed annexation of Gilgit-Baltistan as a province of Pakistan. Pakistan has already violated the UN resolution by permitting the China-Pakistan Economic Corridor (CPEC) to pass through it without seeking India’s consent. The Pakistani offer to India’s dream of accessing the Central Asian markets appears to be too early to become feasible.

India’s cautious approach could be traced to the double-speak of the Pakistani rulers. Earlier, the peace processes were derailed due to the frequent Jihadi attacks on India. The radicalization of the Pakistani army is yet another reason of India’s concern. India knows that whether it is a civilian or military regime, the anti-India sentiments with Islamic overtones have been embedded in the Pakistani army and also in its society.

There are also reports about growing resentment against Bajwa within the army too. The peace offer from Bajwa, who is on extension, needs to be studied carefully.

Bajwa’s appeal for better ties with India was made at the Islamabad Security Dialogue, a two-day initiative jointly organized by the country’s National Security Division in collaboration with its advisory board.

However, he has not indicated whether Pakistan’s ‘deep state’ will discontinue its ‘non-state player’ attacks on India. India is quite aware of the Pakistani proxies attacking Indian installations and even attacking the religious places of Hindus and Sikhs.

Even without any firm assurance of the dismantling of the terror-training camps in Pakistan, the joint statement of February 24, 2021, has been welcomed strictly ensuring the 2003 ceasefire agreement. The outcome of the proposed meeting between Jayashankar and his Pakistani counterpart, Shah Mahmood Qureshi, at the ‘Heart of Asia’ conference in Tajikistan is being keenly awaited.

It is expected to be a follow-up of the Bajwa’s indicative statement for peace that “we feel that it is time to bury the past and move forward”. Bajwa’s statement is accompanied by the Kashmir rider when he cautions that the process of “sub-continental rapprochement” will always be susceptible to derailment due to “politically motivated bellicosity”.

With Xi Jinping’s assertion that China too is a party of the Jammu-Kashmir dispute, the bilateral resolution appears to be much more difficult than most of us believe. The Chinese claim to the Gilgit-Baltistan is being traced to its past history when during late seventh century the Chinese and Tibetan forces had fiercely fought for these territories. India too claims that apart from being a part of the Dogra regime of Kashmir, the Danyor Rock Inscriptions in Sanskrit reaffirm the region’s close ties with India. The British generals lading the Pakistani had forced the region to be under the country. During the 70s, it was made a federally administered region of Pakistan.

Another reason for India’s reluctance to be overwhelmed by the peace offer is due to the ongoing campaign against Khan and Bajwa. The campaign against the army’s frequent hijacking of the democratic systems in the country has now percolated down to the villages of Punjab. Most of the soldiers in the security forces come from the rural Punjab, which is disillusioned with the army leadership.

Since October 2020, when the country’s main opposition parties, the Pakistan Muslim League-Noon (PML-N) and the Pakistan People’s Party (PPP) and Maulana Fazal-ur-Rehman’s political outfit, Jamiat Ulema-e-Islam (JUI-F) have launched Pakistan Democratic Movement (PDM). The situation has worsened following the PML-N chief, Nawaz Sharif’s statement that his daughter, Maryam’slife is under the threat from proxies of the army and the Inter-Services Intelligence (ISI).

The PDM’s decision to postpone the proposed long march to Islamabad scheduled on March 26 to an indefinite date and the seeking of a confidence vote by Imran Khan in the National Assembly may give some respite to the Khan-Bajwa alliance, but it is too early to predict that the PDM has weakened.

There are suspicions that the PPP under its leader, Asif Ali Zardari, is hobnobbing with the army. However, it appears that Zardari’s strategy is to insulate the army from the political arena. He is also keen to neutralize the support of the army to the Khan government. Even
political analysts in Pakistan have become aghast due to the ever-changing stances of Bajwa and his cronies in the country’s politics.

It is difficult to predict any easy solution to the ongoing political crisis in Pakistan. The army had executed Zardari’s father-in-law, Z.A. Bhutto, and later his wife, Benazir, too was assassinated by the ISI proxies. Nawaz Sharif has escaped death in a Pakistani jail by leaving for London for treatment. He apprehends that like Bhuttos, his daughter, Maryam, who is leading his party, too may be eliminated. If she is killed, Pakistan may face unprecedented violence.

The differences between PPP and PML-N are now in the public domain, but they are only about sending the army back to cantonments. Zardari feels that resignations from the National Assembly would allow Khan-Bajwa to enact laws to end the existence of the mainline political parties, the PML-N and PPP. Zardari’s advice of participating in the recently held Senate elections have asserted PDM’s strength, when the finance minister, Abdul Hafeez Sheikh, had lost to the senior PPP leader, Yousuf Raza Gillani, a former Pakistani prime minister.

India is a cautious approach towards the peace overtures from the Khan-Bajwa regime should be understood from the apprehension her acceptance of the proposal may reinvigorate the ruling nexus at the cost of the democratic movement. India’s former foreign secretary, Shyam Saran, has already stated, “it is strange that the momentous political developments currently unfolding in Pakistan have barely registered here in India”. However, with the festive season around, the Long March and resignations may not take place during next two months till Eid is celebrated in May. It also enables India to take her own time before initiating an effective dialogue with her estranged neighbour.

With the congratulatory message from the Indian Prime Minister Narendra Modi’s on the Pakistan Day, celebrated on March 23, to his Pakistani counter-part, Imran Khan, the decks for talks between the estranged neighbours may soon begin. India, however, is quite cautious, and does not want
that the talks should be a pretext to crush the democratic rights of the people.

Modi’s message is expected to facilitate the initial exchanges between the India’s Foreign Minister, S. Jayashankar, and Pakistan’s Foreign Minister Shah Mahmood Qureshi. The two ministers would be participating at the Heart of Asia conference in Tajikistan’s capital Dushanbe on March 30. Meanwhile, the foreign offices of the two countries reportedly are busy in preparing background documents for the initial talks.

Earlier, the Pakistani army chief, General Qamar Javed Bajwa, had suggested better ties with India, which was later re-echoed by Imran Khan. There is also an apprehension that the talks with India may be used by the Khan-Bajwa nexus to suppress the democratic movement in the country. The countrywide demand for the all-powerful army to return to the barracks is being led by the opposition parties under the banner of the PDM (Pakistan Democratic Movement).
It is being led by Maulana Fazal-ur-Rehman, the chief of the Jamiat-e-Ilsma (F) and supported by the two major opposition parties Pakistan Muslim League (N) and Pakistan Peoples’ Party.

It has been customary for the Indian prime minister to greet Pakistan on March 23, but this time the message has a personal touch wishing a speedy recovery for Khan infected with Covid-19, and he also reiterated India’s keenness to have a cordial relationship with the people of Pakistan. He, however, has emphasised that terrorism should have to be abandoned.

It may be interesting to note that the people of Sindh, Baluchistan and Khyber Pakhtunkhwa do not celebrate March 23 as Pakistan Day, but as Republic Day. It is being stated that the 1940 Muslim League resolution passed at its Lahore session had simply stated, “We demand the creation of independent and sovereign states, where Muslims lived in the majority and under the Indian federation.”

The day used to be observed as a Republic Day till the military dictator, General Ayub Khan, had dismissed the civilian government in 1956. He also had changed its name to Yuam-e-Pakistan (Pakistan Day). The majority of Pakistani people, now including citizens of Punjab want the Pakistani army should stop interfering in the elections to install its proxies in the government. It is a well-known fact that Khan, a cricketer-turned-politician, was installed in 2018 as the country’s prime minister by manipulating elections. 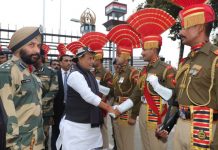 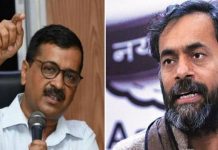