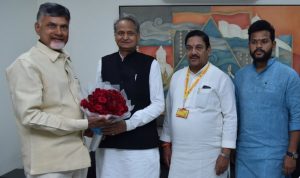 A meeting of all major opposition parties will be held in New Delhi on November 22 to discuss formation of an anti-BJP front ahead of the next general elections.

The plans for a grand opposition show of strength was decided during a meeting between Andhra Pradesh Chief Minister N Chandrababu Naidu of Telugu Desam Party (TDP) and Congress General Secretary Ashok Gehlot on Saturday.

The meeting to be attended by Congress President Rahul Gandhi, Chandrababu Naidu and leaders of other parties is also expected to discuss a common programme for the proposed front.

Speaking to the media, the Andhra Pradesh chief minister said, “this is broadly an anti-BJP platform. This is in the interest of the nation. Save democracy, save the nation and save institutions is the national agenda for us. I am requesting to all parties that we should forget our issues. We have to join together for a broader cause.”

Naidu said that he would meet Trinamool Congress leader and West Bengal Chief Minister Mamata Banerjee on November 19-20 to seek her support for the alliance.

“I am already in touch with Mamata Banerjee but will personally meet her to invite her to be a part of the joint mission”, he said.

The November 22 meeting will focus on the form and structure of the proposed anti-Bharatiya Janata Party (BJP) forum and a course of action to take forward the initiative further. Calling the situation an undeclared emergency, Naidu said that Narendra Modi government was destroying institutions such as the judiciary, Central Bureau of Investigation (CBI) and Election Commission.

The Congress leader said, “it was time to play an important role to save democracy.” 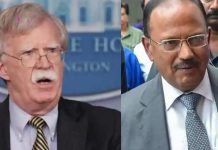