Thus far INS Jalashwa has evacuated 2672 Indian citizens from Maldives and Sri Lanka to India as part of Vande Bharat Mission, according to official release.

The embarkation of Indian nationals was facilitated by the Indian Mission in Maldives. Personnel were embarked onboard after carrying out requisite medical screening. COVID related safety protocols were also strictly adhered to during the sea-passage, the statement said.

The evacuees were received by local authorities at Tuticorin and arrangements were in place for speedy disembarkation, health screening, immigration and transportation of the evacuees.

With this evacuation, the Indian Navy has now repatriated 2874 Indian nationals from the Maldives and Sri Lanka during the ongoing pandemic, it said. 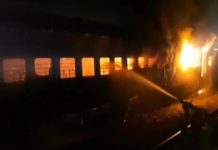