Hizbul terrorist was killed and one army jawan martyred in an encounter that broke out on Sunday morning between security forces and terrorists in Jammu and Kashmir’s Doda district, police said.

Jammu and Kashmir police in a tweet said, “In the ongoing encounter which started today morning at Gundna Doda one terrorist is reported killed so far. Operation is on.”

The gunfight started when security forces launched a joint operation in Gundna area, following information about presence of terrorists there. 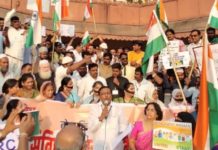