Prime Minister Narendra Modi wrote a letter to the citizens of India to mark the first anniversary of his second term in office on Saturday.

He stated that India has started traversing on the path of vitctory in its long battle against COVID-19 while acknowledging the tremendous suffering endured by migrant workers.

“As we were moving ahead at fast pace in the fulfilment of hopes and aspirations of our countrymen, the Coronavirus global pandemic engulfed our country as well.

While on one hand are powers with great economic resources and state-of-the-art healthcare systems, on the other hand is our country besieged with problems amidst a vast population and limited resources,” Modi said.

“In a crisis of this magnitude, it can certainly not be claimed that no one suffered any inconvenience or discomfort. Our labourers, migrant workers, artisans & craftsmen in small scale industries, hawkers and such fellow countrymen have undergone tremendous suffering. We are working in a united and determined way to alleviate their troubles,” he said.

“However, we have to take care to ensure that inconveniences that we are facing do not turn into disasters. Hence, it is very important for every Indian to follow all rules and guidelines. We have displayed patience so far and we should continue to do so. This is one of the important reasons for India being safer and in a better state than many other countries. This is a long battle but we have started traversing on the path of victory, and victory is our collective resolve,” he added.

PM Modi-led NDA government had first come to power in May 2014. He was re-elected as Prime Minister with a landslide victory on May 23. he took an oath to the office again on May 30.

Recalling that in 2014 people voted for a substantive transformation, he said in the last five years, the nation saw how the administrative apparatus broke free from the swamp of corruption as well as misgovernance. From 2014 to 2019, India’s stature rose significantly. The dignity of the poor was enhanced.The nation achieved financial inclusion, total sanitation coverage, free gas and electricity connections and made progress towards ensuring “housing for all”.

“In 2019, people of India voted not merely for continuity but also with a dream of taking India to new heights. A dream of making India a global leader. The decisions taken in the last one year are directed at fulfilling this dream,” Modi said, noting that today people feel involved in the development trajectory of the nation.

“Powered by the mantra of ‘sabka saath, sabka vikas, sabka vishwas’, India is marching forward in all spheres”, he said.

PM Modi said, “In the last one year, some of the decisions were widely discussed and remained etched in public discourse. Article 370 furthered the spirit of national unity. The Ram Mandir judgment brought an amicable end to a debate persisting for centuries. The barbaric practice of Triple Talaq has been confined to the dustbin of history. Amendment to the Citizenship Act was an expression of India’s compassion and spirit of inclusiveness. But there have been many other decisions that have added momentum to the nation’s development trajectory.” 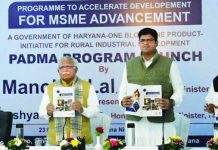