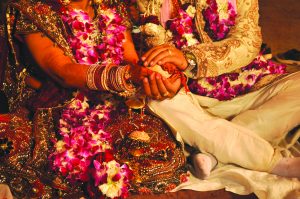 If it was not for the alert cops at the Delhi Airport, who recently, arrested an NRI before he could flee the country thus deserting his wife and son, once again, Gurmeet Singh would have been enjoying his time in Germany. But, for now, he is cooling his heels in a jail in Punjab. He is one of the thousands of fly-by-night-NRI-grooms who fleece innocent parents selling them ‘phoren’ dreams for their daughters.

According to officials, Gurmeet Singh was trying to leave India even as his passport was suspended, the same day when he tried to flee. His wife, Pritpal Kaur, from Samana in Punjab, says that they got married in 2011. Gurmeet was then working as a chef in Germany. After getting married, Gurmeet left for Germany a month later and visited off and on. The couple was blessed with a son a year later. It was only after their son was born that Pritpal discovered that Gurmeet was already married in Germany and had children.

What followed was no less than a nightmare for Pritpal who was shunted out by her in laws and had to endure torture at their hands-both mental and physical for a very long time, all in the name of reaching a compromise. And then, Pritpal’s worst fears came alive when Gurmeet managed to hoodwink the police and leave the country in 2015. He never called her up after that.

It was recently that Pritpal got to know that Gurmeet has returned to India via Nepal route and thus a lookout notice was issued by the police to nab him.

Thankfully, the move by the Regional Passport Office (RPO) to suspend Gurmeet’s passport clicked and since such information gets flashed instantly, Gurmeet was finally nabbed at the Delhi Airport.

Passport Office to the rescue

To ensure that NRI grooms like Gurmeet are not left out to do more harm, the Regional Passport Office (RPO) is doing its bit to bring these truant NRIs to book. Amid thousands of pouring complaints which has become a norm over the years, the RPO, Chandigarh, taking matter in its own hands, has suspended 75 passports so far of such NRIs. The efforts started in May-June this year, when a dedicated helpline was launched for deserted NRI wives or what some may refer to as ‘Honeymoon Wives’ phenomenon. And it is not something new for Punjab what with many Punjabis nurturing a lifelong dream of settling down abroad-by hook or by crook. Although the problems that follow such cases are indeed unique to the state.

As per estimates, there are more than 12,000 such cases of NRI frauds with the RPO in Chandigarh, which covers 24 districts of Punjab, and Haryana besides Chandigarh.   But suspending passports is a long drawn process.

Explaining how the suspension of passports work, Sibash Kabiraj, Regional Passport Officer, Chandigarh, said, “Suspension of passport is done after due diligence and following a procedure which requires adequate paperwork and documentation under the Passports Act, 1967, and the passport manual which have the provision for revoking or suspending passports of NRIs who have been declared proclaimed offenders, or are facing arrest warrants”.

On the piling up of such cases, Kabiraj said, “Many times, even when suspension of passport seems a legitimate action, there are several road blocks such as the victim not in the possession of the required original documents”. “There is local police involved and many times, our staff reaches out to the concerned police station seeking the required documents and yet many times the required warrants are not issued or criminal cases under specific sections are not registered,” he added.

As a part of the process, the RPO is also now informing the companies/ firms which had employed these NRI fraud husbands and also keeping the concerned embassies in specific countries in the loop as well. Also, in the offing is a detailed list of such fraud grooms so that they can be blacklisted and deported back to India as many of these men become are married more than once.

About 13 months ago, Rupali was getting ready for the happiest day of her life-the day of her wedding. With dreams in her eyes for a beautiful life, just as any bride-to-be, she was both excited and anxious on how life will be after getting married.

What happened over the next one month was something that Rupali, an M.Tech in computers and her parents had never imagined even in their distant dreams. Her torture at the hands of her NRI husband who was already married in Canada, and his parents began as soon and within two months, Rupali’s husband Tirlochan Goyal, went to Canada, only to never come back.

It was then that Rupali took help of social media-Facebook, Twitter etc and found that there were thousands of women like her who were the worst sufferers of such cons.  What started as a small group to hear each other out, sailing in the same boat, soon became a strong movement. And that is how, a help and support group-Together We Can, came into existence. With Rupali Gupta of Bathinda (Punjab), Amrit Pal Kaur from Budhlada in Punjab and Reena Chauhan from Kaithal in Haryana at the helm along with others, slowly and steadily more and more women came out to join in.

“We started out as a small group-with just a bunch of us, 10-12 in the beginning who had similar stories to share, some deserted within a week after the marriage to some deserted after two-three years, some with children-we all were bound by a common thread of sorrow, sadness and despair. All of us on an individual level were trying to do all we can to get justice and we decided to rather chip in the efforts together. Today, we are more than 350 women and have a set up at the RPO Chandigarh. We are managing the NRI Helpline and every day we are getting about 50 calls and more and more women are coming out”, Rupali told Tehelka.

In fact, these women now shuttle between their hometowns and Chandigarh often. One of them is always there to attend to calls all day long and even to answer queries of all the walk-ins at the RPO.

Rupali said, “The phone has not stopped ringing eversince the helpline has been launched. Right from queries on how to take these cases forward in order to get justice to sometimes just sharing information to strengthen each other’s case to helping out each other on how to deal with cops- these women all extending all help to each other.”

On being asked as to how do they manage funds for survival and doing such a yeoman service, Rupali, said, “We rely on our families as taking up jobs right now for some of us who do not stay in Chandigarh permanently is difficult since we are in and out of police stations for our cases mostly. But I plan to look for a job soon”. She has taken a paying guest accommodation in the city to do the volunteer work.

“It is said that the first such case came to light in 1996 and then there were a few hundreds and now the numbers run in thousands. If only, the laws then were stricter and guilty was brought to book, things would not have turned so bad. Still, with our collective efforts, we hope to bring down the sufferings of at least some families”, said Rupali.

Mention families and almost all the victims echo similar sentiments. Darshana, 30 year old, who got married two years ago, says, “Not just the girls, it’s the entire family which suffers. There is always social loathing and many people find it easy to blame the girl in question instead of the husband. That is how our society is. This is also the reason that many girls choose to grin and bear it than to go back to their parents. They know they will be subjected to social scrutiny and eventually the fault will be pinned on the victim or her family for not doing enough”, she said.

As many of the victims say, the road ahead is in indeed rocky even though the authorities claim they are doing their work. All the stakeholders involved including state governments, NRI Commissions, Women Commissions, Courts, Police etc have to join hands together and iron out the creases. “Not just stricter laws, but we need more efficient enforcement and quicker redressals in such cases. In so many cases, the police keep dragging its feet, then the matter lingers on in the courts and by the time the case reaches a decisive point, the accused husbands are already preying on their next victims”, said Deepika Gehlot, another victim of NRI fraud husband.

“Even though majority of cases are from Punjab, many of the victims are also from neighbouring states of Haryana, Himachal and even Uttarkhand and Delhi. So there is a need to set up a common authority to deal with such cases”, she added.

“Once the authorities make it mandatory to register all NRI marriages, there will be a decline in such cases. As of now, not many come forward to get their marriages registered with the respective NRI Commissions and many of the NRIs take advantage of this loophole”, said Shikha, a victim of NRI fraud marriage from Delhi.

India a startup nation that offers a myriad of opportunities