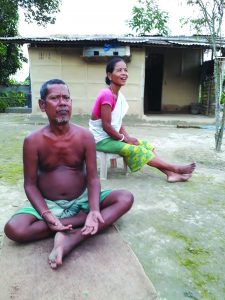 The hope to getting rid of the long refugee tag, however, was dashed on July 30, when the final draft of the NRC containing names of more than 2.89 crore applicants was published. Ninety of the 112 families of Bamungaon in Assam’s Kamrup district, about 60 km west of Guwahati, did not find their names in the draft NRC, raising fears that they would be declared foreigners and “pushed back” to Bangladesh or erstwhile East Pakistan from where their forefathers had migrated to Assam in 1964 to “escape religious persecution.”

“We were certain that we will pass the NRC as we have relief eligibility certificate in my father’s name issued by the government of India in 1964. We had submitted the relief certificate as it is one of the documents accepted for NRC update. But we were shocked to see most of our villagers’ names missing from NRC,”  Nimai Hajong (60) told Tehelka,  sitting with his wife Sinnibala at the courtyard of his bamboo thatched house at Bamungaon.

Although Nimai is unable to tell what exactly had prompted his father Mahadeb to leave their ancestral home in East Pakistan in 1964, he said it could be due to harassment meted out to Hindus by Pakistani forces or the Muslims in Erstwhile East Pakistan, which
became Bangladesh in 1971.

“I was too young to understand. But later I came to know that many like my father had come here as the government of India assured them shelter and brought us as per an agreement between Indira Gandhi and Mujibur Rahman, father of Bangladesh. As we grew up, we never considered India to be a foreign country but we have always been taunted here as
Bangladeshis, refugees and our village is still called a colony. This despite the fact that Assam government provided us with this plot of land in 2005, enrolled us in voters list in 1993 and even accepted us as scheduled tribes. But now how can we be left out of the NRC?” Hajong asked.

Forefathers of most of the Hajong and Bengali families who live here now had taken shelter at Matia in Goalpara district in West Assam and in Silchar in South Assam before they were shifted to Bamungaon colony.

The story of Gunamoni Dalu, a 70-year-old Hajong woman who remained unmarried is equally heart-wrenching.

“My mother was killed by Muslim miscreants in East Pakistan. I came here with my father Dhaneswar. I have no one to look after and I work as a daily wager to survive. What will I do if I am sent back to Bangladesh? I have none there too,” narrated Gunamoni as she looked blank.

“Please do something so that we are included in the NRC,” she requested.

The NRC is being updated in Assam under the supervision of the Supreme Court with March 24, 1971, as the cut-off date, which was decided in the historic Assam Accord of 1985 after the six-year-long anti-foreigner movement. Indigenous people in Assam have since been demanding update of the NRC as they faced identity crisis due to “unabated illegal migration” from Bangladesh through the porous India-Bangladesh borders. They said all post-1971 migrants must be detected and deported to Bangladesh as agreed in the Assam Accord which was signed by former Prime Minister Rajiv Gandhi and those leading the Assam Agitation or anti-foreigners movement.

But Hajongs have questioned why they have been left out despite the fact that they had pre-1971 documents to prove that their forefathers lived in Assam before 1971.

Thirty-seven-year-old Rupdhar Hajong, who had gathered like several others, looked tense. “We were born and brought up here. We grew up hearing the insult of being Bangladeshis but we thought NRC would remove that insulting tag. We all are in favour of NRC and its cut-off date. But, why our applications have been rejected despite the fact that we have pre-1971 documents? We visited the local circle office asking the reasons for rejection of our
applicants, but too seems to be clueless,” he said.

Rupdhar will submit claims with the documents on September 7, the day fixed for submitting claims with necessary documents for inclusion of names of those who were left out of the final NRC draft. “I don’t want my two daughters, Poonam (8) and Shriya to face the same insult of being called Bangladeshis,” he said.

More than 40 lakh applicants failed to make it to the draft NRC, released on July 30, drawing sharp reactions from across the world. This also raised fears that those failing to prove their citizenship could be declared foreigners and rendered “stateless” as Bangladesh have already rejected the allegation that they had illegally migrated from their soil.