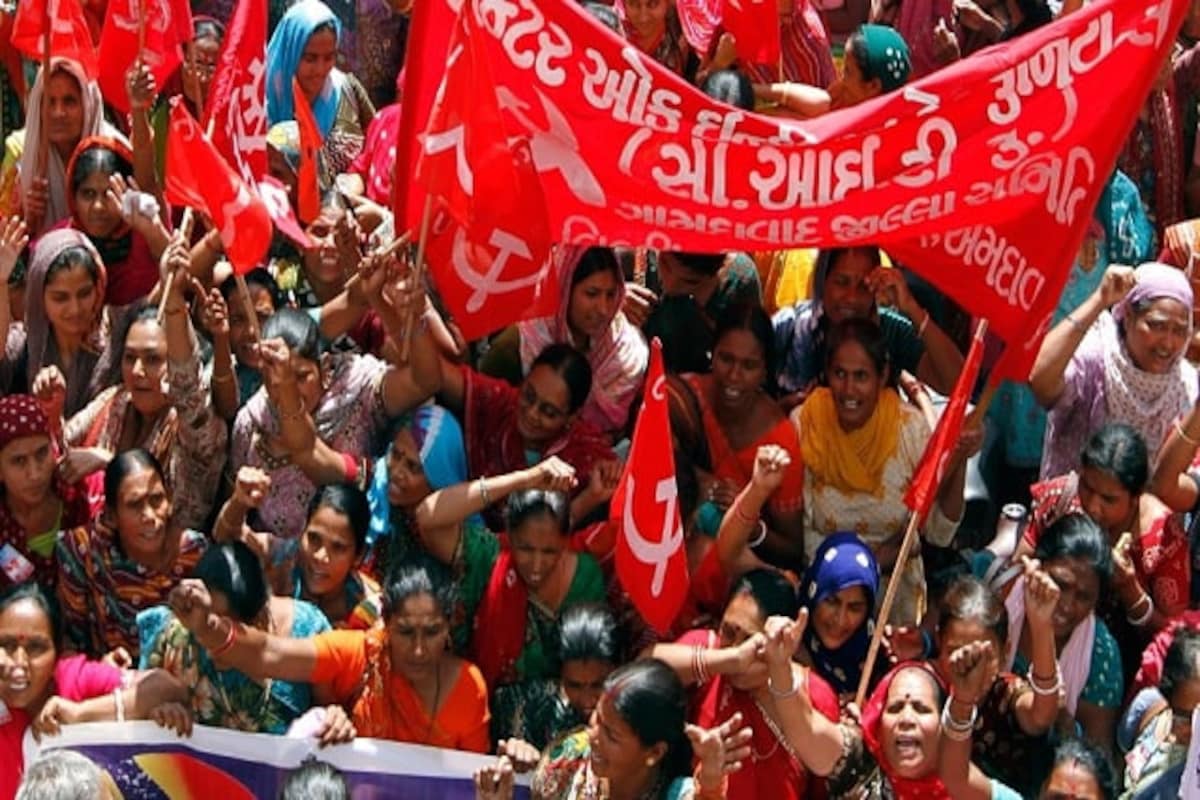 After the government announced the repeal of the three farm laws against which the farmers had been on agitating for almost a year, now it is the turn of trade unions seeking repeal of labour codes to up the ante, writes Shveta Mishra

While farmers have stepped up their protest to seek guarantee on Minimum Support Price and other contentious issues, the trade unions have already announced that they will go in for a two-day general strike in the country during the Budget Session of Parliament demanding repeal of labour codes.

Significantly, the government had claimed that the labour codes were historic, path breaking and a game changer for over 50 crore workers from organized, unorganised and self-employed. The codes are (i) Industrial Relations Code, 2020 (ii) Code on Occupational Safety, Health & Working Conditions Code, 2020 & (iii) Social Security Code, 2020 and (iv) Code on Wages. The government had clarified that these codes take into account the holistic development of the country by keeping the labour interest uppermost in the mind. The argument was that the people have suffered mostly by having multiple laws on labour which involved procedural complexities thereby hindering implementation of various welfare and safeguard provisions. With this 29 labour laws were subsumed in 4 labour codes.  The Social Security Code extended the reach of ESIC to be provided in all 740 districts. Establishments working in hazardous sectors would mandatorily be linked with ESIC, even if there is only one worker working in it. Then provision for making scheme for linking unorganised sector and Gig workers with ESIC. The option to link workers working in Plantations is being given to Plantation owners and option for becoming member of ESIC is also being given to establishments with less than 10 workers.

The reach of EPFO was also extended and its coverage would be applicable on all establishments having 20 workers. At present, it was applicable only on establishments included in the Schedule. Option to join EPFO is also being given to establishments having less than 20 workers. Schemes would be formulated for bringing workers coming under the category of ‘Self-employed’ or falling under any other category under the aegis of EPFO. Provision for Gratuity has been made for Fixed Term Employees and there would not be any condition for minimum service period for this. For the first time, a Fixed Term Employee working for a determined period on contract has been given the right of social security like a Regular Employee. Similarly, with the aim of making a national database for unorganised sector workers, registration of all these workers would be done on an online portal and this registration would be done on the basis of Self Certification through a simple procedure. It would facilitate the extension of benefits of various social security schemes to beneficiaries in the unorganised sector. It was aimed to get ‘Targeted Delivery” of social security done to unorganised sector workers with the help of this database.

The Occupational Safety, Health & Working Conditions Code, 2020 planned to provide free health check-up once a year by the employer for workers which are more than a certain age. Legal right for getting Appointment Letter given to workers for the first time. Cine workers have been designated as Audio Visual Worker, so that more and more workers get covered under the OSH code. Earlier, this security was being given to artists working in films only. The Industrial Relations Code, 2020 made provision for two members instead of one member in the Industrial Tribunal. In case of absence of one member, work can still be undertaken smoothly. Provision for taking the matter straight to the Tribunal in case the dispute is not resolved at conciliation stage. Earlier, the case was referred to the Tribunal by the appropriate Government.

The government also claimed the benefits of the Labour Codes as compulsory facility for Helpline for redressal of problems of migrant workers, making a national database of migrant workers. Provision for accumulation of one day leave for every 20 days worked, when work has been done for 180 days instead of 240 days.  Women have to be permitted to work in every sector at night, but it has to be ensured that provision for their security is made by the employer and consent of women is taken before they work at night.  Provision of “Social Security Fund” for 40 crore unorganized workers along with Gig and platform workers and will help Universal Social Security coverage. Pay parity to women workers as compared to their male counterparts. Occupational Safety & Health Code to also cover workers from IT and Service Sector. It also specified a 14-day notice for strike so that in this period amicable solution comes out.

Union Ministry of Labour & Employment has now been exerting enough to get Draft rules ready for all the four codes, and states seem to be working with the union government. As for the Code of Wages, as many as 21 states have completed the rulemaking process and issued their draft rules, which is the highest in respect of all the four codes. However, only 18 states have issued draft rules for the Code of Industrial Relations, 14 for the Code on Social Security, and 10 for Code on Occupational Safety, Health and Working Conditions. As many as nine states and UTs have finalized their draft notifications for rules for all the four labour codes which also include non-BJP non-NDA ruled states

However, the trade unions are not enthused.  The joint front of 10 Central Trade Unions have termed the four controversial labour codes ‘anti-labour’ and have been demanding scraping of the same. Actually, it was not one protest that the government faced. While farmers were agitating against farm laws, the workforce has been opposing the labour codes presented as reforms.

There is no doubt that in the changing employment scenario, the continuous growth of services sector where unionism is almost negligible, lack of permanent jobs, and industries’ desire to outsource hiring pose threats to the existence of trade unions. The unions are of the view that the Labour Codes discourage their involvement in workspace. Trade unions across political affiliations concur that the fight will shift from the physical to the digital, mass movements will become targeted strikes to seek negotiated results. Also the trade unions in India are not in sync with the changing workspace. The slow death of public sector companies has also harmed the unions. Trade unions are not as united as farm bodies are who kept on fighting despite losing about 700 lives. The agitation of the workforce against the four controversial labour codes lacked unity and consistency in their agitation against the four labour codes. It is because their unity and consistency are not sustainable in the first place due to their vulnerability and livelihood issues. However, the recent success by farmers have reignited hopes of trade unions against labour codes.