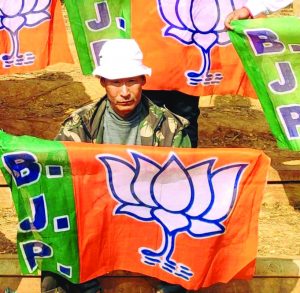 Northeast India, once known as the region of separatists, has joined the general elections starting from 11 April 2019. Defying the old diktat of armed militants in the far-eastern region, millions of electorate are out to to elect their 25 representatives in Lok Sabha, the lower house of Indian Parliament.

BJP led National Democratic Alliance, which is in power at the Centre, has been increasing political influence in the region that was once a stronghold of the Congress. By now the region has no Congress government in any State and the oldest party of India is slowly facing shrinkages in northeastern political space.

Moreover gradual loss of the Congress has turned as the gain of BJP in northeast India. While the party remained in uncertainty over accepting political alliances, the ruling saffron leadership has already sealed electoral ties with a number of regional political parties expecting to succeed in over 20 Parliamentary constituencies of the region.

Assam, centre State of the region, goes to  polls in three phases (11, 18 and 23 April) for 14 Lok Sabha seats, where Manipur and Tripura have two-phase schedule (11 and 18 April) for two seats each. Arunachal Pradesh (two seats), Meghalaya (two), Nagaland  (one), Mizoram (one) and Sikkim (one) have single phase  poling schedule (11 April), outcome of all will be available on 23 May.

BJP has already realigned electoral ties with Asom Gana Parishad (AGP) and Bodoland People’s Front (BPF) and put forward candidates in ten Lok Sabha seats in Assam.  Three seats have been offered to AGP and one to BPF, where too BJP general secretary Ram Madhav is expecting success because he argued, Modi (Prime Minister) wave still continued to influence the electorate as like in 2014 national polls.

Anti-BJP forces in the region are trying to capitalize the public uprising against the saffron party because of its mush debated citizenship amendment bill (CAB)  to pave ways for persecuted religious minorities from Afghanistan, Pakistan and Bangladesh to get Indian citizenship. The anti-CAB movement almost swept the region and a series of public demonstrations were observed until it was lapsed in Rajya Sabha on 13 February.

BJP leadership maintained that it would bring the bill again if voted to power in New Delhi where the Congress president Rahul Gandhi opted for continue opposing the initiative. BJP president Amit Shah, during one of his recent public meetings in Assam, reiterated that his party was committed to grant citizenship to those marginalized asylum seekers.

Once the issue is temporarily over, the saffron party got hugs from the AGP leaders, who in January broke the alliance and three of its ministers in  Sarbananda Sonowal’s cabinet also resigned. But soon after the CAB-lapse Atul Bora (also AGP president), Keshab Mahanta and Phanibhusan Choudhury had rejoined the BJP led government in Dispur and started functioning happily.

Though pretending to be comfortable externally, the BJP leadership has rejected nominations to five sitting MPs including a central minister. The resurgent party, which won seven Parliamentary seats in 2014 Lok Sabha polls from Assam, decided to field young candidates this time including two State ministers.

BJP’s trusted ally BPF puts forward Pramila Rani Brahma as the party nominee for Kokrajhar Lok Sabha seat in western Assam. The State minister is expected to showcase a good fight to the sitting MP Naba Sarania, who used to be a top leader of Ulfa and fought the last general elections as an independent candidate. The list of candidates for the ST reserved seat also includes Sabda Rabha (Congress) and UG Brahma (UPPL).

Prestigious Guwahati Lok Sabha seat is anticipated to witness a spectacular fight between two prominent ladies namely Queen Ojha (BJP nominee and a former Mayor of Guwahati) and Bobita Sarma (Congress). A senior advocate of the Supreme Court Upamanyu Hazarika is also on the fray as an independent candidate, who is expecting supports from conscious electorate of the fairly urbanized Lok Sabha constituency.

Another former leader of All Assam Students Union (AASU) and presently a minister in Sonowal’s cabinet Tapan Gogoi is fighting for Jorhat Lok Sabha seat with the BJP ticket.

He is scheduled to  face visible challenges from popular Congress leader Sushanta Borgohain in the central Assam constituency.

Former State Congress minister  Pradyut Bordoloi has been fielded from Nagaon seat who would be challenged by BJP legislator Rupak Sarma with few other candidates. In Barpeta Lok Sabha seat, the Congress nominee, also a legislator, Abdul Khaleque will face Dipak Das of AGP, whereas the AIUDF president and sitting MP Badruddin Ajmal will face another Congress legislator Abu Taher Bepari in Dhubri Parliamentary constituency.

Elections in Assam and also many parts of the region remain synonymous with violence perpetrated by separatist militant outfits who are fighting New Delhi for decades demanding self-rule to sovereignty. This time, both the factions of United Liberation Front of Assam (ULFA), have shown reluctance in intervening the polls. The pro-talk ULFA faction led by Arabinda Rajkhowa recently made it clear that they would never be a part of the electoral process. Similarly the other faction led by Paresh Barua also maintained silence over their influence in the electoral battles sweeping the region.

The author is a political analyst based in northeast India