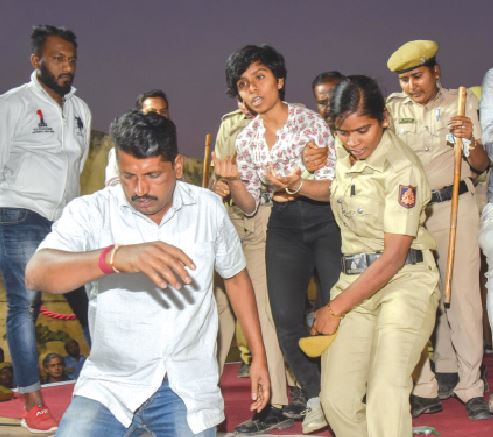 Uttar Pradesh Chief Minister Yogi Adityanath is living up to his vow of punishing the anti-CAA protesters. After the Dec 19, 2019 protest in the state capital, the government has unleashed a series of severe punishment techniques to teach the protesters a lesson that they will remember all their life. It started with issuing of 1.55 crore recovery notices to 57 persons whom the state authorities identified as those responsible for creating arson and lawlessness and for destroying public property.

It was followed by “Name & shame” wherein 100 public hoardings were put across the city on March 6, 2020. The hoardings have the photo, name and address of the alleged protester. The accused are warned that they will have to pay up the fine which by simple calculation amounts to three lakh each. If they failed to pay the fine within a month their personal properties will be confiscated. This is an unprecedented move by any government in the state and one which has till now only been used for wanted criminals and major economic defaulters.

So rushed are the authorities in executing the orders that they have in the photo of Syed Kalbe Sibtain, son of well known Shia cleric, Syed Kalbe Sadiq, not cropped or hidden the photo of a girl student standing alongside. This is in sheer violation of Child Rights laws which specify that pictures of minors can only be used with the consent of the child’s parents or guardians. Kalbe Sibtain, a trustee of Unity College and one of the 57 accused, has strongly objected to this.

He told Tehelka that this is a direct attack on the safety and security of the child and society will not tolerate it. He said this will have a negative impact on the child’s psychology and hinder her growth into a healthy, normal adult. He also emphatically denied any role in the violence that followed the protests and said that he was there just for a few minutes and left thereafter. Labeling the present regime in the state as ‘Hitlershaahi’, Kalbe Sibtain said people like him have no faith left in the government and now they only have the Courts to turn to.

Senior High Court advocate, Mohammed Haider told Tehelka that it is an unlawful act to put up a picture of a minor without their guardian’s consent and more so when it is put up along with an accused by the police is charging on charges of vandalism and damaging public property.

Meanwhile there is a growing demand from the public to remove the hoardings as the matter is sub judicious and is also a gross violation of Human Rights. They see it as a blatant attack on Life and Liberty of an individual guaranteed under the Indian Constitution.

Legal experts are saying that no due process of law has been followed in dealing with the protesters While several of them were picked up and imprisoned directly without even first presenting them before the Judicial Magistrate, as is the law. Maulana Syed Saif Abbas Naqvi, the Shia cleric whose name appears in the hoarding says that he put his own life in danger and tried to pacify the crowd and ensured a safe passage for the foreign tourists stranded at the Bara Imambara in Husainabad, which was the centre of anti-CAA protest in old Lucknow.

Calling it a total failure of the intelligence the Maulana suggested that the government set up an enquiry to check its internal failure.

According to the Maulana the videos made by the district administration at the spot will clearly show the role he played during the protest. The cleric said he has many documents, including phone calls of officers, asking him to help the administration maintain peace to prove his innocence. He said he will bring these facts out at the right time.