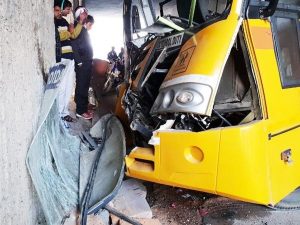 At least 12 students were injured on Saturday morning after a school bus with more than 30 students hit a divider at underpass in Noida.

The bus belonged to Apeejay school in Noida.

The driver and conductor of the bus are said to be in a critical condition.

All the injured were admitted to Kailash Hospital.

The incident took place at an underpass in Noida’s Sector 16, at the crowded Rajnigandha intersection.

The bus has been seized, police said.