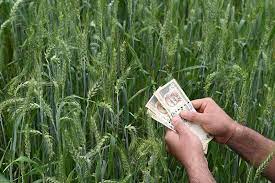 There is no proposal under consideration to waive loans of farmers, including Scheduled Caste and Scheduled Tribe farmers the government claimed on Monday.

Minister of State for Finance Bhagwat Karad said in a written reply to the Lok Sabha, the Centre has not implemented any farm loan waiver scheme since ”Agriculture Debt Waiver and Debt Relief Scheme (ADWDRS), 2008”.

According to Bhagwat Karad-“ there is no proposal under consideration of the Government of India to waive off the loans of farmers including Scheduled Caste and Scheduled Tribes farmers in the country,”

He also planned key proposals taken by the government and the Reserve Bank of India to reduce the debt burden of farmers and for welfare of the people engaged in agriculture, including SC/ST.

He mentioned schemes like interest subvention for short-term crop loans of up to ₹ 3 lakh, RBI’s decision to raise the limit for collateral-free agriculture loan from ₹ 1 lakh to ₹ 1.6 lakh, and direct income support of ₹ 6,000 per year to farmers under Pradhan Mantri Kisan Samman Nidhi.