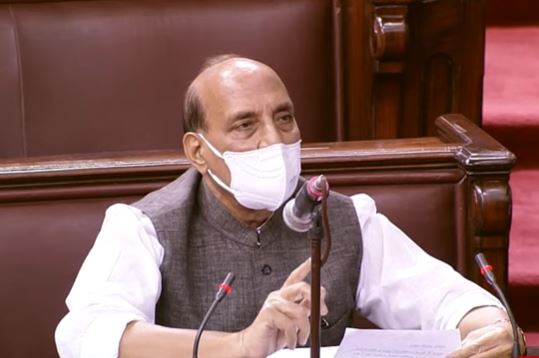 While addressing the Rajya Sabha on Thursday, Defence Minister Rajnath Singh said India wants a peaceful solution to the boundary issue but will not shy away from any action required to defend the sovereignty of the country.

Singh said China attempted to change the status quo along the Line of Actual Control (LAC) with its provocative military manoeuvres in August month and that there is a mismatch between what China says and does.

“While no one should doubt our determination to safeguard our borders, India believes that mutual respect and mutual sensitivity are the basis for peaceful relations with neighbours.  As we want to resolve the current situation through dialogue, we have maintained diplomatic and military engagement with the Chinese side,” said Rajnath.

“In these discussions, we have maintained the three key principles that, determine our approach: (i) both sides should strictly respect and observe the LAC; (ii) neither side should attempt to alter the status quo unilaterally; and (iii) all agreements and understandings between the two sides much be fully abided by in their entirety.  The Chinese side, on its part, took the position that the situation should be handled in a responsible manner and ensure peace and tranquility as per bilateral agreements and protocol. However, it is apparent from Chinese activities that their words don’t match their actions,” he added.

“A case in point is that even when the discussions were going on, the Chinese side again engaged in provocative military manoeuvres on the night of 29th and 30th August in an attempt to change the status quo in the South Bank area of Pangong Lake.  But yet again, timely and firm actions by our armed forces along the LAC prevented such attempts from succeeding,” the Defence Minister said.

Rajnath said, “As of now, the Chinese side has mobilized a large number of troops and armaments along the LAC as well as in the depth areas. There are several friction areas in Eastern Ladakh including Gogra, Kongka La and North and South Banks of the Pangong Lake. In response to China’s actions, our armed forces have also made appropriate counter deployments in these areas to ensure that India’s borders are fully protected.”