Uttar Pradesh Chief Minister Yogi Adityanath on Friday said that keeping in mind the larger public interest, the government has neither increased the VAT and nor has imposed any new tax in the state.

Chairing a meeting of the state tax department pertaining to revenue collection at his residence, he said that Value Added Tax (VAT) will not be increased in the near future too.

Adityanath said the amount collected from the public will be spent on developmental and public welfare works, according to an official statement released here.

He directed that for financial year 2022-23, concrete efforts should be made pertaining to revenue collection with an aim to collect Rs 1.50 lakh crore as Goods and Services Tax (GST) and VAT.

The chief minister also directed officials that the number of GST-registered traders should be increased to 4 lakh in the next 6 months.

The traders should be told about the benefits of GST registration/return, the statement said quoting the chief minister. 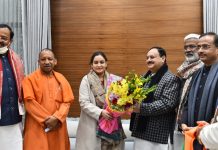