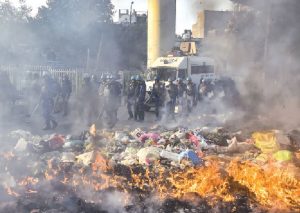 The violence hitting parts of northeast Delhi — especially Chand Bagh, Jaffrabad, Karawal Nagar, and Maujpur segments — claiming death of nearly 50 people and hundreds sustaining injuries does not augur well for the image and pride that the national capital has come to command’ especially in the aftermath of recently-concluded assembly elections. More than 250 FIRs have been registered and over 900 people arrested or detained.

This occurrence of violence in the capital for the past some days is the worst since the protests against the Citizenship Amendment Act (CAA) began more than two months ago. The turmoil in northeast Delhi which began on February 23 turned deadly after a local political leader made provocative speech that proved instrumental in triggering clashes between pro-CAA protesters and anti-CAA protesters.

Strange administrative arrangements between the Centre and the elected government of Delhi is a contributory factor for deteriorating law and order situation in the national capital and the ongoing uneasy situation in northeast Delhi is a direct outcome of this. According to preliminary media reports, at the initial stage of eruption of violence, the Delhi Police, under the Central Government, seemingly appeared unable to keep things from spiraling out of control, with many accusing the Police personnel doing little to prevent mobs from turning arsonist right before their eyes. Worsening situation on February 25 led to clamping down of curfew in the riot-hit areas along with deployment of Rapid Action Force squads. Nevertheless, communal conflagration still seemed ablaze past sundown of February 25.

Trigger to the escalation of violence, as per media reports and various videos that have gone viral on the Internet, was provided by inciteful speech by a political leader on February 23 to the pro-CAA protestors who were demanding clearance of area where women were protesting at Jaffrabad Metro Station since the night of February 22 against the CAA and the
National Register of Citizens (NRC). A local political leader, who has a history of making communal and incendiary comments, led a pro-CAA rally on February 23 wherein he reportedly gave an ultimatum to the Police, warning them to get the roads cleared of protestors in Jaffrabad or “we won’t listen to you.” Media reports indicate that just hours after the rally of February 23,clashes erupted in north-east Delhi between thousands demonstrating for and against the CAA. 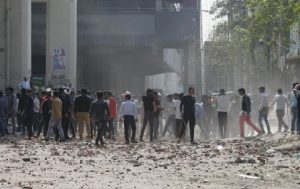 Apart from setting ablaze a taxi and other vehicles in the vicinity of the, the mob also set ablaze four buildings in the area and mob used torches, burning slippers and balls made of cloth to set off fires after their attempts to break shutters failed. A dozen policemen stood a few metres away, watching and did nothing to disperse this mob.

The crowd moved away only when the heat from the burning buildings became unbearable. The scenario near the Maujpur-Babarpur Metro station witnessed pelting of stones at each other between two rival camps — one supporting the CAA and the other against it – and when having failed to hit each other, they reportedly resorted to pelting stones at the panes of buildings around them.

Afterwards, they brought down banners and hoardings of local businesses and tore them to shreds. The streets of riot-hit areas witnessed people belonging to rival camps guarding their premises. Escalation of violence in northeast Delhi on February 25, just 15 km away from where US President Donald Trump and Prime Minister Narendra Modi met for talks, bodes ill for India claiming to be world’s largest democracy.

Local BJP leader Kapil Mishra’s provocative speech at Maujpur on February 23 that is said to have caused escalation of violence has been criticized by almost all peace-loving people, especially by BJP MP Gautam Gambhir who is reported to have said: “This is unfortunate. Whoever has done this, strict action must be taken — whether from BJP, Congress or AAP. Kapil Mishra’s speech is not acceptable. This is about Delhi not about any political party.”

Eruption of violence in nation’s capital — where apostle of non-violence Mahatma Gandhi fell a prey to an assassin’s bullets and has a smadhi at Rajghat — is a deplorable act. These incidents of escalation of violence have seen huge clouds of smoke billowing from a tyre-market that was set alight, and mobs wielding sticks and stones seen walking down the streets in parts of northeast Delhi amid fresh reports of stone-throwing.

Paramilitary troops armed with assault rifles are patrolling the streets that were strewn with rocks and shards of glass. Imposition of curfew in violence-torn areas albeit a temporary step, may cause hardships to local residents.

Unease in some parts of the capital is prone to affect the movements of the public, transport system, businesses and livelihoods of many people. The poor, women and children are worst
affected in these areas. With the closure of the schools in the northeast parts of the capital, some metro stations in city are also affected. No consolation can compensate the losses of the families who have lost their dear ones in this violence. The CBSE has deferred board examinations scheduled for February 26 in violence-hit parts of northeast Delhi; two Class X exams and three Class XII exams have been postponed.

The government of Delhi led by AAP has issued appear for peace. Delhi Chief Minister Arvind Kejriwal, after praying at Mahatma Gandhi’s memorial in Rajghat on February 25, visited the injured in the hospital. While appealing for peace, Kejriwal said: “Whatever problems people have can be resolved peacefully. Violence will not help find a solution. This madness should stop.”

Incidents of looting and burning buildings and vehicles, smoke rising from buildings and streets strewn with rocks and broken glasses after three days of violence between pro- and anti-citizenship law protesters is what characterizes this insanity in which the people of Delhi are the ultimate sufferers. The violence has left neighbourhoods looking as though it was a war zone. Delhi Police, having come under heavy criticism for apparent inaction in time, responded late with a renewed push through violent-hit areas. Shocking visuals exhibiting tear gas being fired and pitched battles between protesters and outnumbered cops in areas like Chandbagh and Bhajanpura raise many questions on the efficacy of the police in handling such precarious situations.

The Union Home Ministry, which said on February 24 evening that the situation was under control, repeated those assurances the next day as well. The Union Home Minister chaired a meeting with cops and officials on the evening of February 25 – his third in 24 hours — to discuss the violence. Nevertheless, the ministry’s comments about adequate police forces contradicted statements made by senior Delhi Police officers, who often complained that it was non-availability of forces that led to escalation of violence on February 24. Interestingly, media reports citing government sources make it discernible that violence seemingly appears to have been ‘orchestrated’, as it came at a time US President Donald Trump was visiting the
country.

When President Trump was asked by media persons for his reaction to the violence, he said he had not discussed it with Modi as it is “up to India to deal with it.” President Trump’s remark that America appreciated PM Modi’s efforts to ensure religious freedom in India has been contested by many experts. In the meanwhile, the Delhi High Court is likely to hear soon a plea seeking registration of a FIR and arrest of persons involved in the ongoing violence in North East Delhi.

At a time when anti-CAA protests on the pattern of Shaheen Bagh are going on in more than 90 districts throughout the length and breadth of the country, eruption of violence Delhi in the backdrop of anti-CAA protests does not bode well for the peace and tranquility of the nation. If riots can be engineered in Delhi, the same can be replicated elsewhere to tarnish the peaceful character of the anti-CAA protests. The hardline approach adopted by the Centre not to initiate a dialogue withthe protestors and the mechanism of countering such protests by rival protests by the ruling party is no solution to redress thegrievances. There is an age-old maxim vox populi vox dei meaning voice of the people is the voice of God. When such a large number of masses are on the streets protesting against a certain legislative measure, it devolves on the dispensation at the helm to initiate a dialogue with these protesting groups and this is in consonance with the letter and spirit of the Constitution and healthy norms of democracy by virtue of which NDA is saddledin power.

Undoubtedly, India’s apex court is seized of the matter, especially in the aftermath of the reports submitted by its appointed interlocutors recently; nonetheless, Supreme Court has to look into legal side of the issue in the present context of Shaheen Bagh protests and its verdict on CAA will take time. Real solution lies with the Central Government to initiate a dialogue. In the meanwhile, there is also a need for redefining relations between Delhi Government and Central government with regard to vesting some police power with the Delhigovernment so that the administrative lapses that have led to escalation of violence don’t recur.

The writes is Executive Editor of News24. Views expressed are author’s own