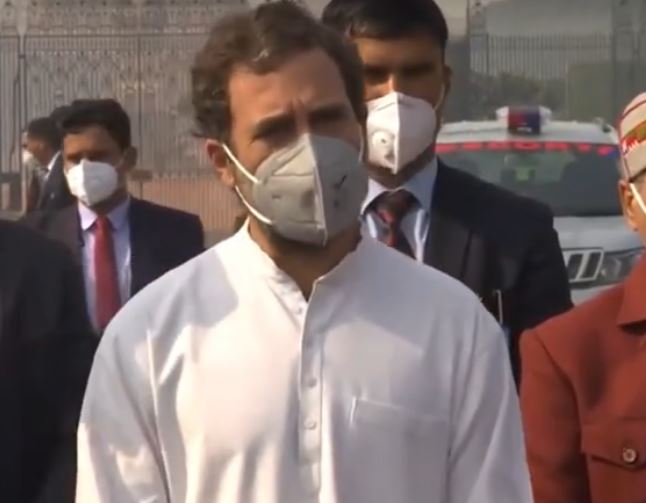 Rahul said, “I told the President that these farm laws are anti-farmer. The country has seen that farmers have stood up against these laws.”

After the meeting, Rahul Gandhi in his sharp attack on Prime Minister Narendra Modi said, “these farmers are not going to go back home until these farm laws are repealed.”

Rahul further said there was no democracy in India and those who stood up against the Prime Minister were labelled terrorists, even if it was RSS chief-Mohan Bhagwat.

“PM Modi is making money for the crony capitalists. Whoever will try to stand against him will be called a terrorist – be it farmers, labourers and even Mohan Bhagwat,” the former Congress President said.

Earlier, Priyanka Gandhi and other leaders were taken into custody as Congress’ march to Rashtrapati Bhavan was stopped by police.

They were taken to Mandir Marg Police Station in New Delhi, sources said.

Congress party tweeted, “the delegation of Congress leaders including, Smt. @priyankagandhi, MPs, CWC members & senior party leaders have been detained by the Delhi police on their way to Rashtrapati Bhavan.”

Priyanka said, “any dissent against the Narendra Modi government is classified as having elements of terror.”

“We are undertaking this march to voice our support for the farmers,” she said.

“We’re living in a democracy and they are elected MPs. They have the right to meet the President and they should be allowed. What is the problem with that? Government is not ready to listen to voices of lakhs of farmers camping at borders,” she added.

Farmers have been protesting since November 26 at various border points of the national capital against three farm laws.