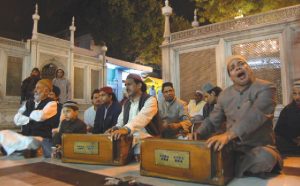 The shrine of Sufi saint Hazrat Nizamuddin Auliya is one place where you can look for your kind of solace, alongside witnessing the century-old tradition of Qawwali every Thursday night.

Located in the narrow lanes of west area of New Delhi, Hazrat Nizamuddin Aulia Dargah has carried on the tradition of performing live music (Qawwali) for 700 years now.

A part of popular culture now, these Qawwalis have now contributed to Hindi films like Rockstar, their conscientious mention in the book, City of Djinns, by William Dalrymple is heart-warming too.

The Thursday night Qawwali or ‘Jummeraat’ attracts people, from all backgrounds, age and religion, and hence its ever-so growing popularity. It is the melody of Sufism that connects people to Nizamuddin Dargah .

The country yard of Nizamuddin is a place for more than 70 graves of famous poets, saints and Mughal emperors, including Amir Khusrau; Jahanara, daughter of Mughal emperor Shah Jahan; Muhammad Shah Rangeela and many more.

My first visit to the Dargah, on a chilly winter evening a couple of years back, changed into a habit, a routine, apart of my Thursday schedule, in no time. You have to take the narrow lanes dominated by the flower and chadar sellers to find yourself finally to the Dargah entrance. As soon as you enter, a sense a calmness overpowers your heart. Every corner of the Nizamuddin Dargah smells of rose petals, offered by the devotees.

The shining expanse of the Dargah , the Farsi inscription on the shrine, beautiful artwork crafted on the walls and pillars make you fall in love with the place instantly.

Qawwali starts right after the maghrib namaz (the evening prayer). The qawwals start with the intonations of ‘Allah Hu’ and soon the echoes of some famous Qawwalis like Chap Tilak, Kun Faya Kun, Tajdare Haram, Aaj Rang Hai, and others, cheerfully start filling the place.

The crowd starts gathering from early evening, and sometimes the Dargah gets so crowded that some of the people have to stand and enjoy the musical night. The crowd there also reflects the diversity of India.

The Dargah is one of the most-visited places among the tourists too. A group of four people from Australia, that I met recently, were shocked and mesmerised by the magical and mystical atmosphere of the place.

“I have never experienced something like this before in my life. It is the best place I have visited in India so far. I would like to revisit this place,” shared John who has to the country for a month-long vacation.

Another tourist, Pietro from Milan who is chef by profession said that “Food is the thing what brought me here. I had one of the best kababs here but then the Qawwali is just a cherry on the cake for my trip to India.”

It is not just the Qawwali that brings people of different religion and region together at the Dargah, it is also the faith in Nizamuddin Auliya. Faith has no religion at Nizamudin and you can spot several no-Muslims offering chadar and rose petals to the Sufi saint’s tomb.

Asha Devi from Noida travels all the way to Nizamuddin as she believes that her prayers are always accepted at the Dargah .

She said, “I came here for the first time years ago, when my father was not well. Someone told me to offer chadar to the shrine and I did the same. My faith brings me here everytime time I am in trouble.”

Qawwalis are like musical stories and qawwals are the storytellers. They narrate stories through music, which will surely touch your heart. It is truly an incomprehensible experience.

Amar Gujral, a footballer by profession was on his first visit on Thursday a few days back. He said, “I have been to Dargah many times but this is the first time I am listening the Qawwali. I have always heard about it from people and now I understand why one shouldn’t miss it. This is a place which takes you to another planet.”

In between the chitter-chatter of the crowd, while listening to the Qawwali, I usually get lost in the whirlpool of my inner thoughts and then suddenly a clarity of ideas surprises me. This, to me, is one of the biggest appeals of the place. Some have told me that they have lost and found themselves here adoring Nizamuddin Aulia.

By late evening, people start leaving and the Dargah compound gets almost empty. The doors of the Sufi saint’s grave-chamber for the night are closed. This is the time when the qawwals, stand up and gather in the middle of the courtyard to offer a Persian prayer to the Sufi saint, which is said to be written by Hazrat Nizamuddin himself. Though I don’t understand all of it but it brings peace of mind every time. Once asked the meaning, someone told me that the prayer implores blessing to the next morning’s breeze.

“I find peace and solace here. I go back with peace every time, I visit Nizamuddin. It is like every Thursday outing for me,” shared Nikita Jain, another devotee at Nizamuddin.

Neha Dutt, an Indian-origin resides out of India shared her account of listening to the Sufi music at Dargah . She said, “I never miss Nizamuddin whenever I come to India. It is my all-time favourite place. The kind of acceptance I get here is out of the world.”

Nizamuddin is a place which accepts you with all your flaws and evils. People stand in a queue to get a glimpse of the shrine of the Sufi saint. The crowd waits for hours for the qawwals to create the sama (Sufi atmosphere).

The few hours you’ll spend listening to the Thursday night Qawwali will take you to a journey of self-exploration. The splendid musical hours will be like ages and seconds– all at one time.