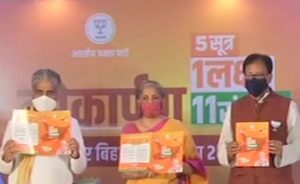 Presenting the manifesto, Nirmala Sitharaman said, “As soon as the COVID-19 vaccine will be available for production at a mass scale, every person in Bihar will get free vaccination.”

In its ‘Sankalp Patra’, the BJP has promised jobs for the youth and expressed its commitment to turn Bihar into an information technology hub. The manifesto envisions a self-reliant Bihar and lists out the roadmap for the next five years.

The Congress and Lok Janshakti Party (LJP) released their respective manifestos on Wednesday for the Bihar Assembly elections.