The Supreme Court on December 13 has dismissed the petition filed by lawyer Alakh Alok Srivastava, seeking directions to the Centre for the immediate execution of the four convicts– Mukesh, Pawan, Vinay and Akshay — in the 2012 Nirbhaya gang rape and murder case.

An SC Bench headed by Justice Madan Bhimrao Lokur and Justice Deepak Gupta, after noting that the petition is devoid of merits, dismissed the petition of Srivastava, stating, “What kind of prayers you have? Dismiss.”

“You are making the court a joke,” the Bench added.

In 2012, the 23-year-old paramedic student was gang-raped on the intervening night of December 16-17, inside a running bus in South Delhi by six persons and severely assaulted before being thrown out on the road.

The victim died on December 29, 2012, at Mount Elizabeth Hospital in Singapore.

The Nirbhaya incident led to a huge public outcry, prompting the government to overhaul anti-rape laws. 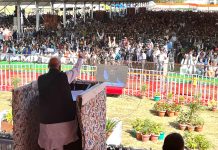