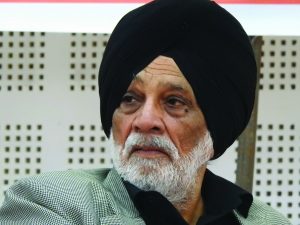 Kirpal Kazak, a mason by profession, will be sitting along with 22 prominent literary figures, including Shashi Tharoor. Kazak — fondly known as Punjab’s Verrier Elwin — is one of the recipients of the Sahitya Akademi Award. The 76-year-old author is among six short story writers who have been awarded one of the highest literary awards in the country for his collection of stories in Punjabi Antheen (Endless).

Born in village Bandoke of Distt Sheikhpura, which is now in Pakistan, Kazak started out as a mason. He later went on to spend several years with nomadic tribes researching their way of life. At the age of four, the author migrated to Patiala from Sheikhpura, where surviving a poverty-ridden life he joined the family occupation of masonry. At 19, he wrote his first short story.

Even during his tough days, Kazak continued with his writing pursuits. He met Amrita Pritam  a novelist, essayist and poet who wrote in Punjabi and Hindi at one point of time. She encouraged him to start writing books. Kazak started contributing a column to Amrita’s publication Nagmani. His first book Kala Ilm (black magic), was published in 1972.

This ninth pass writer joined the department of literary studies at Punjabi University, which acknowledged his intellect and contributions. He started researching the culture of nomadic Punjabi tribes such as Sikligars and Gadi Lohars with his work often being compared to the British-born anthropologist Verrier Elwin.

Looking at his contribution to Punjabi literature, Kazak was appointed as a folklore assistant in Punjabi University and retired as a professor. Punjabi University has published over 12 research books penned by Kazak, who mostly concentrated on research-based content. Besides, he contributed to children’s literature too by penning Khul Ja Sim Sim, Jo Dard Nahi, Aao Pind Dekhiye and others.

Kazak has penned over 24 books in Punjabi. Most of his books have vastly explained the life of marginalised communities in India. His contributions to writing for telefilms, documentaries and others are also liked and appreciated. His father Sadhu Singh Ramgarhia was a narrator and was well versed in Arabic, Persian and Sanskrit languages. His mother’s name is Veer Kaur.

Among the recipients of the 2019 honour is writer and politician Shashi Tharoor, who was conferred with the award for his work An Era of Darkness: The British Empire in India published in 2016. The awards will be presented on February 25, 2020 in New Delhi.

List Of Winners In Different Language And Genre Categories: